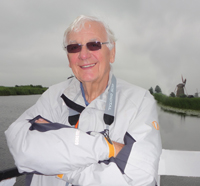 John (Johannes) Boksteyn, beloved husband of Mary Thompson-Boksteyn of Medicine Hat and of the late Yvette Boksteyn, passed away on Friday, March 25th, 2016 at the age of 83 years. John also leaves to cherish his memory his four sons, Rick (Linda) and their sons, Derik and Ben (Janae), John (Deidra) and their children, Sommer-Lee, Ashley (Craig) and John Cameron (Brittany), Brad and his son, Rylan (Jazmine) and Michael (Deborah) and their son, James; his daughter-in-law, Gwynn Boksteyn (Bob Wagner) and her children, Justin (Jill) and Jenna (Joanna); two great-grandchildren, Jaymes and Nixon; one brother, Johan Boksteyn-Vander Kooy; one sister, Niesje (John) Vander Nuelen; Yvette’s sister-in-law, Marjorie and her children; and Mary’s children, grandchildren and great-grandchildren. John was predeceased by his first wife, Yvette; his son, Daniel John Boksteyn; his father, Johannes Bokstein; his mother and step-father, Helena and Frederick Vander Kooy; and two brothers, Aart and Pieter; as well as Yvette’s family: her parents, Panphile and Violet Dufort; one brother, Victor; and one sister in early childhood.

John immigrated to Canada from Holland in 1954 and met his young love, Yvette Dufort and they were married in 1955. Together they raised five sons and were blessed with nine grandchildren. During this time, John was employed with the City of Medicine Hat for 30 years where he held various rewarding positions including police officer, recreation director, Medicine Hat centennial planner and Arena manager. Yvette supported John’s career inspirations and she passed away in 2003.

Many people referred to John as “Big John”. To many, John was a man whose voice alone meant business but he was also known to others as being a very generous person with a huge heart. John spent the majority of his adult years dedicated to community service, serving on numerous community boards and volunteering with numerous organizations. His desire to enrich the community began with the Royal Life Saving Society of Canada and he continued to serve time with organizations such as the Alberta Marlin Aquatic Club, Youth Justice, The Kidney Foundation and St. Vincent de Paul Society. He also served a term as school board trustee with the Catholic School district and provided excellent leadership for 18 years on the Palliser Health Authority. Additionally, John organized the first Dutch Canadian Society meeting in 1982 and continued as an active member even in poor health. He was also a member of the Knights of Columbus. John truly believed he was his brother’s keeper.

John married his second wife, Mary Thompson on November 27th, 2004. Together they enjoyed almost 12 years of marriage. John especially enjoyed their new home and spending the winter months in Mexico. Together they loved spending time at the beach with their Mexican friends whom referred to John as “Juanote”. Often, many friends and relatives would plan trips to Mexico to visit John and Mary. John thoroughly loved the playful children and enjoyed taking part in the water activities.

John was very dedicated to his Dutch heritage and had made numerous trips to Holland. He was especially proud to introduce Yvette to Holland as well as his oldest son Dan, wife Gwynn and their children, as well as his youngest son, Mike. It was equally as important for John to take Mary to Holland soon after they were married and most recently he returned to Holland with two adult grandchildren. His family and close friends may remember many of his Dutch traditions. One of which was celebrating New Year’s Day, Dutch style, where he opened his home to many family and friends with Olle Bollen and his tasty Pea Soup. John appreciated all of his long-time friends, particularly, Ted Grimm, Mel Schmidt and Noorali Bharwani.

Unfortunately John slipped on some ice in February of 2015 and his health declined after the fall. While in care John often said to Mary “let’s go home” and now Dad you are home!

The family would especially like to thank the staff from Riverview Care Centre for the excellent care and love that was demonstrated to John as well as the staff from Medicine Hat Regional Hospital, 2 North. Additionally a special thanks to Dr. Bharwani and Dr. Hirsch.

The Funeral Mass will be celebrated at ST. PATRICK’S ROMAN CATHOLIC CHURCH, 238 – 2nd Avenue NE, on Thursday, March 31st, 2016 at 2:00 p.m. with Father John L. Maes, celebrant. A private interment will take place in the family plot at Hillside Cemetery. Memorial gifts in John’s memory may be made to Kidney Foundation of Canada, 6007 – 1A Street SW, Calgary, AB T2H 0G5 or to the Society of Saint Vincent de Paul of Canada, St. Patrick’s Medicine Hat Conference, P.O. Box 24054 RPO Crestwood, Medicine Hat AB T1A 8M8 or to the Canadian Cancer Society, 102 – 1865 Dunmore Road SE, Medicine Hat, AB, T1A 1Z8 or to a charity of one’s choice. Condolences may be sent through www.saamis.com or to condolences@saamis.com subject heading John Boksteyn. Funeral arrangements are entrusted to