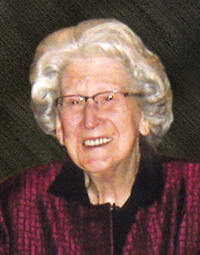 June Elizabeth Moore of Medicine Hat, passed away unexpectedly March 28th, 2016 at the age of 90, just 9 days short of her 91st birthday. June was born April 6th, 1925 in Wareham, Dorset, England, the second daughter of William F. and Amy Moss. It was 70 years ago this week that she arrived in Canada as a young war bride just in time to celebrate her 1st wedding anniversary. While working in the administrative office of the Women’s Land Army in Winchester, England, June met a young Canadian soldier who, at the time, was stationed near her family home. She married Dean I. Moore of the Social Plains District near Bindloss on March 31st, 1945 in the village of Chandlers Ford, England. Having never experienced farm life before coming to Canada, she embraced country living with a strong sense of adventure and determination. With the exception of riding a horse, she took on any challenge put before her. June was often referred to by her father-in-law as “the best hired hand ever”. She carried this strength of character and sense of determination with her the rest of her life, allowing her to remain in her own home until her passing. They continued to farm and ranch in the Bindloss area until their retirement to Medicine Hat in 1975. After retirement Dean and June spent many years RV’ing and fishing with close friends. In the years following Dean’s passing, June enjoyed her knitting, garden, visits with family and friends and even well into her 80’s she was still able to enjoy several trips to England to visit family. June was predeceased by: husband, Dean in May of 2003; daughter, Wendy Lehman in December of 2015; her parents; and sisters, Betty, Ruth, and Edwina. June is survived by immediate family: son, Barry Moore; grandsons, Michael (Kara) Moore and Jason Leismeister; great grandchildren, Kennedy Moore and Dre Leismeister; and son-in-law, Lorne Lehman. She also leaves to mourn: her sister, Wendy (Ken) Willoughby; and brother, Robin (Joan) Moss of England; brother-in-law, Harold (Jeri) Moore Jr. of Lethbridge; “adopted” son, Clyde Devitt of Calgary; many cherished nieces and nephews in both Canada and England; and many friends. The family would like to acknowledge Dr. Ben Durand and his team, and the nurses and doctors at Medicine Hat Regional Hospital for their care and support of June over the last several years. At June’s request no formal service will be held. A private family internment will be held at a later date. Memorial gifts in June’s memory made be made to the Alberta Heart & Stroke Foundation, #124, 430 – 6th Avenue SE, Medicine Hat, Alberta, T1A 2S8, or to the charity of one’s choice. Condolences may be sent through www.saamis.com or to condolences@saamis.com subject heading June Moore. Funeral arrangements are entrusted to