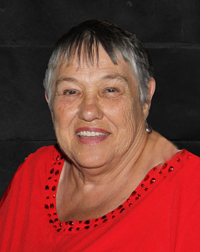 Patricia Valerie Bertrand (nee Hay) passed away peacefully on March 30th, 2016 at the Medicine Hat Regional Hospital at the age of 75 years. Pat was born on June 26th, 1940 in Geraldton, Ontario to Hazel and Ormand Hay. They moved back to Saskatchewan where Pat received her schooling in Simpson before moving to Alberta. There she met the love of her life, John Bertrand, and they married in 1964. Pat and John resided and worked in Calgary, and on retirement, moved to Champion, Alberta in 1982. They then looked to British Columbia and in 1986, they bought property in Sanka Park and Boswell before making the move into Creston, British Columbia in 1996. After her beloved John died in 2009, Pat made the move to Medicine Hat in 2012 where she remained until her passing. Pat loved to garden, enjoyed camping, cooking, music, entertaining family and friends, and had a love for animals. She was a strong, kind and generous lady who was much loved and will be forever missed. Pat was predeceased by her husband, John; her father, Ormand Hay; her mother and stepfather, Hazel and Fred Ulmer; and several brothers-in-law and sisters-in-law. Pat leaves to mourn her brothers, Howie (Bonnie) Ulmer, Dean (Margaret) Ulmer, Jay Ulmer, Rod (Barb) Ulmer; her sister, Joan (Terry) O’Connor; sister-in-law, Betty Utigaard; brother-in-law, Paul Bertrand; as well as numerous nieces and nephews and great nieces and nephews. At Pat’s request, there will be no funeral service. A private family gathering will be held at a later date. Condolences may be sent through www.saamis.com or to condolences@saamis.com subject heading Pat Bertrand. Funeral arrangements are entrusted to