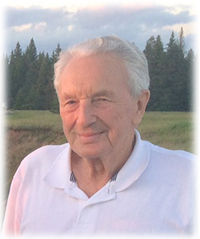 Mr. Gordonâ€ˆDixon, beloved husband of the late Violet Dixon, passed away at the Medicine Hat Regional Hospital on Friday, April 1, 2016, at the age of 86 years. Gordon was born September 10, 1929 in Young, Saskatchewan, a son to Frank and Essie Dixon. He grew up on the family farm near Young and later moved with his family to Watrous and Kindersley. Gordon wore many hats over the years working in a various fields before finding his niche as an automotive mechanic. He spent 40 years of his life twisting wrenches and helping people with their mechanical problems. He enjoyed the company of people as he had the gift of gab. He could talk to anyone he met and he was well liked by those who met him. His retriement consisted of the perfect job as a greeter at Superstore where he chatted with the many customers. Gordon was an avid pool player and was very good at it. He entered many eight ball tournaments, from Edmonton to Las Vegas, and was victorious in his efforts. In 1997, Gordon and Vi moved to Medicine Hat and made it their home. He was community minded and in his younger years served on the Credit Union Board of Directors and up until recently served on the Condo Board where he was residing. Gordon left a lasting impression on his family and friends and leaves to cherish his memory his son, Murray and his children, Shane Dixon and Pamela Dixon; Charles and his two sons, Ryan (Amanda) Dixon and their children, Nicole, Sarah and Katie; and Tony Dixon; Russell (Colleen) and Russell’s children, Amber Dixon and Brendan Dixon; son-in-law, Bill Delday and his children, Dena (Jeff) Delday, Amy (John) Delday and their children,â€ˆCaleb and Logan Rask; and Brett (Stacy) Delday as well as numerous nieces, nephews and extended family. Gordon was predeceased by his wife, Violet; daughter, Marcie Delday; parents, Frank and Essie Dixon as well as his siblings, Robert Dixon, Jean Dixon and Muril Dixon. A Celebration of Gordon’s life will be held at Cook Southland Funeral Chapel, 901 – 13 Street S.W., on Saturday, April 9, 2016, at 11:00 a.m. with Life Celebrant Gerry Getz officiating. The service will be live streamed to our website at the scheduled time. Simply click the “Watch Service In Progress” button on the left side of our home page: www.cooksouthland.com (Condolences may be expressed by visiting our website at www.cooksouthland.com) Memorial donations in Gordon’s name may be made directly to the Salvation Army, 164 Stratton Way, S.E., Medicine Hat, Alberta, T1B 3R3 or to the Canadian Cancer Society, 102 Crestwood Square One, 1865 Dunmore Road, S.E., Medicine Hat, Alberta, T1A 1Z8. Honoured to serve the family is

Leave a Condolence for Sharla C