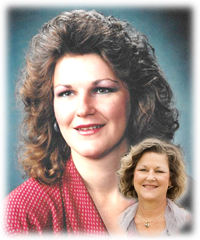 Darlene Gale Herman, beloved wife of Wayne Herman and mother to Ashley, Nichole and Zachary, passed away at Rockyview General Hospital in Calgary at the age of 54 on Saturday, April 2, 2016. Born January 2, 1962 to William “Jack” Castle (predeceased) and Sharon Delaney, Darlene was the first baby born in Olds, Alberta that year. She took great pride in her role as a mother, wife, daughter, sister and aunt. A lover of fine foods and entertaining, guests at Darlene’s table were never left wanting more. Darlene will be deeply missed and is survived by her husband, Wayne Herman; her children, Ashley (Nolan) Campeau, Nichole Herman and Zachary Herman; her mother, Sharon Delaney; her sisters, Diann (Merle Jensen) Castle, Dona (John Bowie) Fox and Dale Castle; and numerous nieces, nephews and extended family. A Celebration of Darlene’s life will be held at Cook Southland Funeral Chapel, 901-13 Street S.W., Medicine Hat on Saturday evening, April 9, 2016, at 6:00 p.m. with Life Celebrant Gerry Getz officiating. Immediately following, the celebration will continue further into the evening at the facility located directly beside Cook Southland. (Condolences may be expressed by visiting the Cook Southland website at www.cooksouthland.com) Memorial donations in Darlene’s name may be made to a charity of one’s choice. Honoured to serve the family is