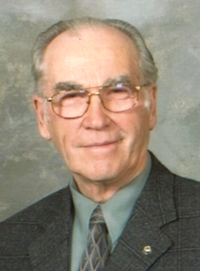 Ronald James Lane, went to be with his Lord and Savior Jesus Christ in Bow Island on Monday, April 4, 2016, following a courageous year and a half battle with cancer.

The Funeral Service will be held at the Christian Community Church, 415 – 4 Avenue, Burdett on Tuesday, April 12, 2016 at 1:00 P.M. Condolences may be forwarded by visiting our website at www.southlandfuneral.com.

He was predeceased by his parents Henry and Jessie Lane, brother Wesley Lane, sister Thelma Froese as well as several brothers and sisters-in-law.

Ron was born on April 23, 1933 in Peace River. In 1936 his family moved to the Foremost area, and soon after they moved south of Burdett. On October 2, 1954 he married his love, Norma Peterson. Ron and Norma had three children and twenty one foster children that they raised on their farm south of Burdett. He was a man of many talents, carpentry, welding, mechanics, electrical work, farming and ranching, just to name a few. Ron served on numerous boards and committees in and around his community, most recently he served for twenty one years as a county councillor for the County of Forty Mile.

He was a very active member in his church. Ron served the Lord with his whole heart, and loved sharing Gods love with anyone he came in contact with. He was a devoted Christian, husband, father, grandfather, great grandfather and friend. Ron will be dearly missed by all those who knew him.

Trust in the Lord with all thine heart; and lean not unto thine own understanding. In all thy ways acknowledge him, and he shall direct thy paths. Proverbs 3:5-6

If friends so desire, memorial tributes in Ron’s name may be made directly to the Bow Island & District Health Foundation, Bag 3990, Bow Island, Alberta T0K 0G0.

One Condolence for “RON LANE”