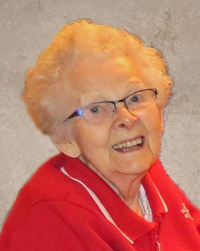 It is with deep sadness that the family of Mary Wice announces her passing on Tuesday, April 5th, 2016 at the age of 93 years, surrounded by her family. Mary, one of 5 children, was born in Little Lever, near Bolton, in Lancashire, England to Richard and Cecilia (Wood) Jarvis. She was a good athlete and a capable student. At age 14, Mary left school to work to support her family. At age 15 they all moved to Blackpool. One year later World War II broke out. Mary met a Canadian soldier and her future husband, Frank, in Blackpool at age 20. They exchanged letters 2 or 3 times a week for 18 months while Frank was stationed in Ceylon and married when Mary was 22 on March 6th, 1945. At war’s end, Mary, the war bride, had to wait 12 months for an available ship to join her husband in Saskatoon. She lived in and raised her three children there and in Medicine Hat, where the family moved to in 1960. In England, Mary worked in clothing and biscuit factories, and as a telephonist, as well as in an aircraft factory making Wellington bombers. In Medicine Hat, Mary did the books for Crescent Heights Hardware and Floor Coverings, a business owned by Frank and his brother, Ken. Mary enjoyed dancing, bowling and fishing. She often boasted of catching more fish than Frank. In later years, vacation trips, particularly cruises, brought her great pleasure. She loved flowers and was known for her beautiful letters and special occasion cards, as well as for her preparation of wonderful meals. What absolutely brought her the most pleasure was spending time with her family. She lived in her own home, with support from her children, particularly her son, Cam, until a month before her passing. Mary had a beautiful smile and a kind, gentle nature that was rooted in a positive attitude towards life and a quiet, but strong determination to succeed. She treated everyone with respect and always made visitors to her home feel most welcome. Mary will be missed greatly by her family and friends. Cherishing her memory are her three children, Jarvis (Beverly) Wice of Salmon Arm, BC, Marilyn (Randy) Pocock of Lethbridge, AB, and Cameron Wice of Medicine Hat, AB; her five grandchildren, Adrienne Bootsma of Salmon Arm, Heather (Calum Hughes) Wice of Kelowna, BC, Michelle Pocock of Calgary, AB, Liana (Jonn) Schoolkate of Medicine Hat, AB and David (Chelsea) Pocock of Priddis, AB; her eight grandchildren, Harley and Jaron Bootsma, Malcolm and Grady Hughes, Claudia and Dominic Schoolkate, and Jonah and Hannah Pocock; her numerous nieces and their families; and her sister, Doreen. Mary was predeceased by her husband, Frank Wice in 2002; and her siblings, John Jarvis, Stella Bristow and Richard Jarvis. The Funeral Service will be held at SAAMIS MEMORIAL FUNERAL CHAPEL, 1 Dunmore Road SE, on Tuesday, April 12th, 2016 at 3:00 p.m. with Gary W. Goran officiating. Interment will follow in the family plot at Hillside Cemetery. Condolences may be sent through www.saamis.com or to condolences@saamis.com subject heading Mary Wice. Funeral arrangements are entrusted to