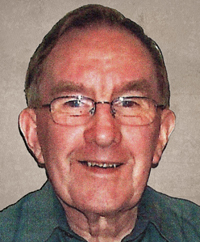 John Baxter, beloved husband of Agnes “Nessie” Baxter of Medicine Hat, passed away on Tuesday, April 12th, 2016 at the age of 82 years. John also leaves to cherish his memory his daughter, Anne Baxter; two grandchildren, Allison (Bryan) Jeal and their children, Kaiden and Isaac, and Andrew Scott; three sisters, Chris, Ella (Bill), and Margie all in Scotland; and one sister-in-law, Pat Cook. John was predeceased by his parents, Archibald and Christina; one grandson, Derick Scott; and two brothers-in-law, Andy (Agnes) Cook and John Cook. John was born on March 30th, 1934 in Scotland. While in the British Military, John served with the United Nations Black Watch in Japan and Korea from 1952 to 1954. He married Nessie in Scotland on July 21st, 1956. While in Scotland, John worked at a Stationery Store. John and Nessie moved to Canada in 1966 settling in Edmonton. He began working for Canada Post as a postal carrier in 1968 retiring in 1994 when they settled in Medicine Hat. He was an avid Maple Leaf fan and loved the company of his family and friends, especially his grandchildren. John and Nessie enjoyed many trips to Scotland, were avid walkers and dog lovers. John will be lovingly remembered by his family and friends. The Funeral Service will be held at ST. JOHN’S PRESBYTERIAN CHURCH, 504 – 2nd Street SE, on Saturday, April 16th, 2016 at 11:00 a.m. with Reverend Dr. Nancy Cocks officiating. Interment will take place at a later date at Saamis Prairie View Cemetery. Memorial gifts in John’s memory may be made to St. John’s Presbyterian Church Memorial Fund, 504 – 2nd Street SE, Medicine Hat, Alberta, T1A 0C6, to the charity of one’s choice. Condolences may be sent through www.saamis.com or to condolences@saamis.com subject heading John Baxter. Funeral arrangements are entrusted to