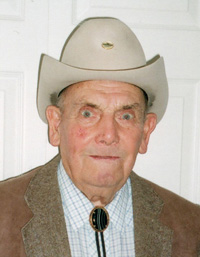 Lavern Arnold Kurpjuweit of Seven Persons, beloved husband of the late Marianne Kurpjuweit, passed away on Wednesday, April 13th, 2016 at the age of 94 years. Lavern leaves to cherish his memory his son, Brian Kurpjuweit; his daughter, Brenda Millions; his son-in-law, Edwin Derzaph; six grandchildren, Paige, Derek and Kelci Kurpjuweit, Kristy (Dallas) Nittel, Bradley and Tracy Derzaph; three great-grandchildren, Darian, Evan and Ava Nittel; as well as numerous nieces and nephews. Lavern was predeceased by his wife, Marianne; one daughter, Shirley Derzaph; one granddaughter, Kimberly Derzaph; one brother, Art Kurpjuweit; one sister, Evelyn Price; and son-in-law, Brock Millions. Lavern was born on May 14th, 1921 in Medicine Hat and was raised on the family farm in the Red Rock District south of Seven Persons. He attended Red Rock School and went on to SAIT in Calgary where he enrolled in a mechanics and blacksmith course. He returned to the farm to work with his dad and upon his parents’ retirement, Lavern continued to farm. On November 23rd, 1950, Lavern married Marianne Moss in Medicine Hat. In 1956, he purchased a section of land closer to Seven Persons where the family home was built. Lavern was on the Board of Directors for the St. Mary’s River Irrigation District for six years and was also a 4-H Leader for the Seven Persons 4-H Beef Club. He was a member of Hillcrest Evangelical Church and the Medicine Hat Antique Car Club. Lavern retired to Medicine Hat in 1996. Those wishing to pay their respects may do so at SAAMIS MEMORIAL FUNERAL CHAPEL, #1 Dunmore Road SE, on Tuesday from 12:00 to 12:55 p.m. The Funeral Service will be held at SAAMIS MEMORIAL FUNERAL CHAPEL on Tuesday, April 19th, 2016 at 1:00 p.m. with Pastor Mark Bolender officiating. Interment will follow in the Family Plot at Saamis Prairie View Cemetery. Memorial gifts in Lavern’s memory may be made to charity of one’s choice. Condolences may be sent through www.saamis.com or to condolences@saamis.com subject heading Lavern Kurpjuweit. Funeral arrangements are entrusted to