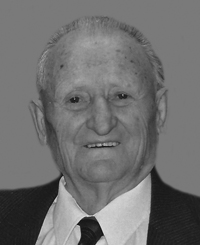 Beloved husband, father, Opa and Grand-Opa, John Wirth went to be with his Lord and Savior on April 15, 2016. He was predeceased by his daughter Marie Charlet in 2010.

John was born in Bonyhad, Hungary and grew up working on the family farm. He met his future wife Christine there and in 1947 they were married after their families moved to Germany. John worked in Frankfurt for 6 years, helping to rebuild the city after the war. The young couple immigrated to Canada in 1952 with their 3 year old daughter. They settled in Valleyview, Alberta to homestead, where they had two more children. As well as the full time job of clearing the bush from their land, John spent ten years working on the oil rigs. There were many, many days that he only slept for a few hours between jobs, yet it was known that he had the cleanest barn in the area!

In 1973, John sold the farm and moved his family to Calgary, where he worked at a trailer manufacturing company for the next five years. His dedication to his work earned him the respect of his boss and co-workers. No one worked harder than John. After their last child was married in 1979, John and Christine retired to Medicine Hat where John worked a the flour mill for a short time. He enjoyed gardening and was an ardent recycler. You could see him every day picking up bottles and cans as well as old bicycles and just tidying up the neighborhood in general. He repaired many a bike and sold quite a few that he had fixed. One thing you noticed about John, he was always singing or humming a tune. If you were seated in front of him at church, you couldn’t miss what a powerful voice he had when it came time to sing hymns. In September of 2011, John and Christine moved to Cochrane. A great big thank you to all the staff at Big Hill Lodge and John’s Home Care Nurses for their kindness and compassion to John over the last few months.

John was a great example to his children and grandchildren, whom he loved dearly. He will be missed greatly by his wife of 69 years Christine, his son Alfred (Anne), his daughter Dorica Parrott (Norm), his son-in-law, Marie’s surviving husband, Dennis Charlet (Irma), all nine grandchildren and five great-grandchildren. John believed that cleanliness was next to Godliness. If there are brooms in heaven, he is sweeping the streets of gold!

A Funeral Service to honour John’s life will be held at Cochrane Alliance Church (902 Glenbow Drive, Cochrane, AB) on Thursday, April 21, 2016 at 1:00 pm with viewing starting at 12:00 pm. Following the service, John will be laid to rest at the Cochrane Cemetery. A time for fellowship and remembrance will follow the graveside service at the church.

In lieu of flowers, a memorial donation may be made to a charity of your choice.