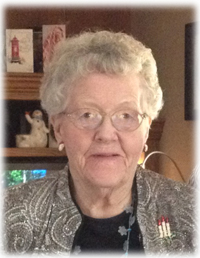 Blanche Ferne Rose (nee Ramm), beloved wife of the late Walter Rose, passed away suddenly while at the Medicine Hat Regional Hospital on Sunday, April 17, 2016, at the age of 84. She is survived by her children, Norton (Simone) Rose, Clare (Kathy) Rose, Vaughn (Camille) Rose and Lindsy (Ralph) Bonogofski; seven grandchildren, Schaun (Tracy) Rose, Wade Rose, Kaila Fischer, Shane Rose, Shyloh-Dawn Bonogofski (Tyler Swann), Josh Bonogofski (Ranelle Roy) and Chad (Chaylene) Demontigny; seven great-grandchildren, Wryan and Marley Rose, Dakota and Dalyce Rose and Denika, Logan and Megan Demontigny as well as her step-mother, Alice Ramm. Blanche was predeceased by her husband, Walter; her mother and step-father, Dorothy and Mac Nichol; her father, Bramwell Ramm and her sister, Elaine Ramm. Blanche was born in North Battleford, Saskatchewan where she resided until she relocated to Medicine Hat, graduating from Alexandra High School. She went on to attend Normal School in Calgary to become a teacher. Blanche taught Grade 5 at Riverside School until she and Walter were married. The following years brought her much joy and happiness with the birth of her 4 children. She was a loving and nurturing mother who was completely devoted to her family and cared for them all. Blanche worked hard for her church where she spent countless hours volunteering. She organized many activities such as teas, rummage sales and turkey dinners. Being awarded the Lifetime UCW Membership was a humbling experience for her. Blanche was very gifted artistically, winning awards for her creations. She won first place for some of her painted glassware at the Medicine Hat Exhibition. Blanche was a very selfless, wise, strong and accepting woman and was an inspiration to all who knew her. She accepted everyone as they were, never judging them. We will all miss her wacky sense of humor. A Celebration of Blanche’s life will be held at Fifth Avenue Memorial United Church, 476 – 4 Street S.E., Medicine Hat on Friday, April 22, 2016, at 2:00 p.m. with Interment to follow at Hillside Cemetery. (Condolences may be expressed by visiting our website at www.cooksouthland.com) In lieu of flowers, family request that donations be made to the Fifth Avenue Memorial United Church Memory Fund, in care of Fifth Avenue Memorial United Church, 476 – 4 Street S.E., Medicine Hat, Alberta, T1A 0K9 or to a charity of one’s choice. Honoured to serve the family is