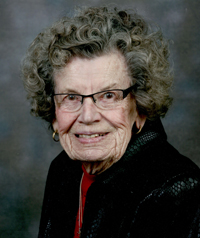 Mrs. Grace Fenrich of Medicine Hat, passed away peacefully in her sleep on Monday, April 18th, 2016, four days short of her 98th birthday. Grace was predeceased by her husband, Michael Fenrich in 1997. Grace leaves to cherish her memory one daughter, Sharon (Dale) Odland of Medicine Hat; one son, Marvin (Terry) Fenrich of Kelowna, British Columbia; four grandchildren, Sharon’s children, Sheldon (Brenda), Shaun (Shannon), Robin (Lawton), and Marvin’s son, Andrew (Astrid); six great- grandchildren, Kelsey and Jenessa, Sheriden and Shaye, Logan and Kassie; one sister, Blanche; as well as numerous nieces and nephews. Grace was predeceased by her parents, David and Ester Cocks; four brothers, Barry, Glen, Oscar, and Ross; and one sister, Nora. Grace was born on April 22nd, 1918 in Leader, Saskatchewan and was raised in the Leader area. She married Michael Fenrich in 1944. Together they farmed in the Prelate District until 1960 when they moved to Medicine Hat. Grace and Michael were both employed on the custodial staff of McCoy High School until 1978 and they were members of St. Patrick’s Roman Catholic Church. Grace enjoyed growing flowers for which she received many ribbons at the Medicine Hat Exhibition and Stampede. She grew wonderful vegetables to share generously with her family, friends, and neighbours. She always delighted in giving and making others happy. Grace lived independently in her home until age 95 when she moved into Masterpiece Retirement Residence where she lived to the fullest and appreciated wonderful care and friendships. Grace will be sadly missed by her family, but she will always be remembered for her love, caring and generosity. A Private Graveside Service will be held at Hillside Cemetery on Saturday, April 23rd, 2016 with Father Francis Tran, officiating. Memorial gifts in Grace’s memory may be made to the charity of one’s choice. Condolences may be sent through www.saamis.com or to condolences@saamis.com subject heading Grace Fenrich. Funeral arrangements are entrusted to