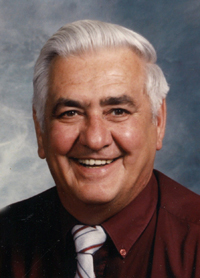 Stephen Joseph Gyorkos of Medicine Hat, beloved husband of the late Mary Gyorkos, passed away peacefully on Friday, April 22nd, 2016 at the age of 82 years. Stephen was one of many siblings born December 8th, 1933 in Medicine Hat, Alberta.

Stephen honed his cooking skills as a youngster when his mother went into the hospital for an operation and he wanted to cook for his siblings. Almost up until his last day he cooked and baked for his family. His many other talents included carpentry, gardening, sewing and if something was broken he was the epitome of “Mr. Fix It”.

As a teen he went to St. Teresa’s and in the summer enjoyed working on his Uncle and Aunt’s farm in Vauxhall. He loved playing competitive hockey as a teen and recreational hockey as an adult. Stephen then went to work at Gyorkos Cleaners. He knew Mary was the love of his life when he met her and he continued to work at the Cleaners after they were married and raising a young family. Always striving to better himself, he excelled at what was then called Night School to upgrade so he could go to College. His College days did not last long as he began his lifelong career at AGT (Telus) and got great pleasure meeting with the Telus coffee crew each week after his retirement. Dad loved working in his yard and tending to his garden which he even did this summer as his health declined.

His grandchildren were a huge part of his life and his love, advice and stories will help over time to heal the hole in their hearts. Steve and Mary travelled to many different continents meeting lifelong friends on their travels. Dad missed Mary terribly when she passed 10 years ago but he eventually took on the role of both Grandpa and Grandpa and spoke daily on the phone with Maureen upon her passing as she had always done with Mom. Dad was diagnosed with Stage 4 colon cancer 3 years ago. He never complained, enduring a difficult surgery, faithfully going to chemo every 3 weeks for 18 months. Thankfully, he did not suffer day to day affects from the chemo but suffered kidney damage which this past December, resulted with him requiring dialysis 3 times a week.

Thank you to all the caring people in the Cancer Clinic, Dialysis Unit, 4th Floor West, Palliative Care and Janice and staff from Home Care. Dad had a special rapport with Dr.’s Foley, Dr. Ahmad, Dr. Alphin and Dr. Harrison, enjoying all the laughs they shared. Dad’s neighbors, Brian and Pam were always a phone call away, for this we thank-you. Cathy at Special Transit was so kind on his first trip and many to follow as were other drivers.

Further memories will be shared in the Eulogy at Prayers Monday evening. Following the eulogy, the family invites anyone with a special memory to also share with those in attendance. Unfortunately, Dads’ wish to pass at home never happened, but he is now in his Eternal Home with our Lord and his beloved wife Mary.

Those wishing to pay their respects may do so at SAAMIS MEMORIAL FUNERAL CHAPEL, #1 Dunmore Road SE, on Monday from 6:00 until 9:00 p.m. and at ST. PATRICK’S ROMAN CATHOLIC CHURCH, 238 – 2nd Avenue NE, on Tuesday from 12:00 until 12:55 p.m. Vigil Rites (Prayers) will be said at SAAMIS MEMORIAL FUNERAL CHAPEL, on Monday, April 25th, 2016 at 7:00 p.m. The Funeral Mass will be celebrated at ST. PATRICK’S ROMAN CATHOLIC CHURCH, on Tuesday, April 26th, 2016 at 1:00 p.m. with Father Tomy Manjaly, Celebrant. Interment will follow at Saamis Prairie View Cemetery. Memorial gift in Stephen’s memory may be made to the Margery E. Yuill Cancer Centre, the Palliative Care Unit or to the Dialysis Unit, all c/o Medicine Hat and District Health Foundation, 666 – 5th Street SW, Medicine Hat, Alberta, T1A 4H6. Condolences may be sent through www.saamis.com or to condolences@saamis.com subject heading Stephen Gyorkos. Funeral arrangements are entrusted to