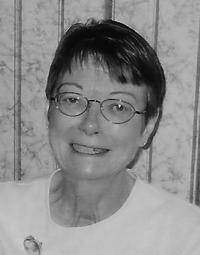 It is with heavy hearts that we announce the passing of Lorraine “Raine” Mary Gibson (nee Hansen) on Sunday, April 17, 2016. Lorraine was born and raised in Manchester, England and immigrated to Canada in 1965. Lorraine lived in Medicine Hat, AB until moving to Calgary, AB in 2010. Lorraine worked as a book keeper for The Chloride Electrical Storage Company in Manchester, England and after her children had grown Lorraine returned to work in Medicine Hat, AB as a prep cook and later as a post office worker. Lorraine has been reunited with her beloved husband Donald and son Adam Gibson as well as sister Jacqueline Taylor (nee Hansen), Father Samuel and Mother Phyllis. She is survived by her son Guy Gibson of Medicine Hat, AB, daughter Ashley (Alan) Halbert and grandchildren Abbigail and Auren of Calgary, AB, brother in law Alan Taylor and his family of Manchester, England. A Celebration of Lorraine’s Life will be held at the Whiskey Creek Pub, (937 13 St SW, Medicine Hat, AB) on Saturday, May 14, 2016 from 2:00pm – 4:00pm. Photos, memories and condolences may be shared with Lorraine’s family through www.evanjstrong.com. In lieu of flowers, memorial donations may be made directly to the Alzheimer Society of Canada (website: www.alzheimer.ca). Arrangements in care of