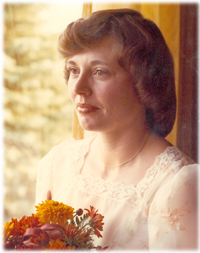 Mrs. Gail McIntyre, beloved wife of Larry McIntyre of Medicine Hat for 38 years, passed away suddenly on Friday, April 8, 2016, at the age of 59 years. Besides Larry, she leaves to cherish her memory her children, Scott (Kaeli) McIntyre, Christopher (Jesse) McIntyre and Brett McIntyre; grandchildren, Damon, Sophia, Edin, Allison and Samantha; two sisters, Norma (John) Leader of Fort Saskatchewan, Alberta and Colleen (Jim) Pallister of Portage la Prairie, Manitoba; father and mother-in-law, Clarence and Marge McIntyre; sisters and brothers-in-law, Linda and Dale Burch, Carol Cairnes, Brad and Sheri McIntyre as well as numerous nieces, nephews and extended family. Gail was predeceased by her parents, Jim and Jean Boddy. Gail was born November 30, 1956, in Portage la Prairie and grew up on her parents farm located just north of the city. The values of farm life were instilled in her at a young age as a 4H member for years and won many awards for public speaking. She received her primary schooling at Rob Roy and Portage schools and later attended college in Winnipeg where she studied Secretarial Science. Gail met Larry in High School and after an inseparable romance, they married in 1977. In 1979, Larry and Gail moved to Burstall, Saskatchewan where they had two sons, Scott and Chris. In 1986 the family moved to Medicine Hat and their third son Brett was born. Gail was dedicated to her sons and was an avid hockey and soccer mom. When the boys were older Gail decided she needed something to keep busy – with one resume she was working at a medical walk-in clinic and later worked for Dr. Durand. After suffering an accident she decided to stay at home. Gail enjoyed her crafts and spent countless hours making Christmas Stockings for every new baby that was born in the family. Gail’s passing was unexpected and too soon and she will be greatly missed by her family and friends. A Celebration of Gail’s life will be held at Cook Southland Funeral Chapel, 901 – 13 Street S.W., Medicine Hat on Friday, April 29, 2016, at 2:00 p.m. (The service will be live streamed to our website at the scheduled time. To view, simply click the “Watch Service In Progress” button on the left side of our home page: www.cooksouthland.com) Columbarium placement will follow at Hillside Cemetery. (Condolences may be expressed by visiting our website at www.cooksouthland.com) Memorial donations in Gail’s name may be made directly to Crohn’s and Colitis Canada, 3100, 246 Stewart Green S.W., Calgary, Alberta, T3H 3C8. Honoured to serve the family is