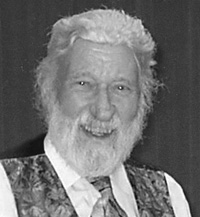 Chairman of the Board of the Brenda Strafford Foundation.

Barrie Ingram Strafford was born in Manchester, England on September 26, 1928. His early years were academically strong and he competed in swimming and track and field. He also enjoyed tennis, racquetball, golf, crib and flying his own airplane. He competed on an eight-ball pool team with his son and grandson until his passing. After the tragic loss of his wife Brenda, Barrie founded The Brenda Strafford Foundation.

Barrie’s commitment to service has resulted in numerous honours over the years, The Sisserou Award of Honour from People of Dominica; Honourary Doctor of Laws Degree from the U of C; The Queen’s Golden Jubilee Medal; the Alberta Centennial Medal; Honourary Fellowship in the Royal College of Physicians and Surgeons of Canada; The Alberta Order of Excellence; Partner in Health Award (CARNA); Queen Elizabeth II Diamond Jubilee Medal; Grant MacEwan Lifetime Achievement Award-Calgary Awards 2014; The 2016 Humanitarian Award of Friends of Good Shephard International–Jamaica. Barrie also received the highest papal honour available when he was made a Knight of the Order of St. Sylvester by Pope Benedict XVI.

Funeral Services will be held at McINNIS & HOLLOWAY (Park Memorial, 5008 Elbow Drive S.W. Calgary, AB) on Friday, May 6, 2016 at 10:00 a.m. Condolences may be forwarded through www.mcinnisandholloway.com. If friends so desire, in lieu of flowers, memorial donations may be made directly to The Brenda Strafford Foundation, 4628 Montgomery Blvd N.W., Calgary AB T3B 0K7

4 Condolences for “STRAFFORD, Dr. Barrie I.”

Leave a Condolence for Dave & Linda