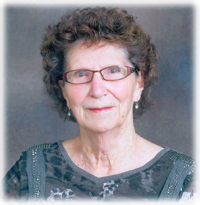 Anne Hildenbrand, beloved wife of the late Mr. Ernest ‘Ernie’ Hildenbrand, passed away peacefully at the Medicine Hat Regional Hospital on Thursday, April 28, 2016, at the age of 83 years. Anne leaves to cherish her memory: son, Brad (Val) Hildenbrand; daughter, Shelley (Brad) Hearn; grandchildren, Jeff (Amanda) Hildenbrand, Carrie (Steve) MacLeod, Falon (Ryan) Cooke and Dane Hearn; great-grandchildren, Avalon, Celeste, Sam, Ben and Maelle. She is also survived by one sister, Marie Schmaltz; two sisters-in-law, Adeline Schmidt and Josephine Mastel as well as numerous nieces, nephews, cousins and her caring and loving neighbours on Riverside. She was predeceased by her parents, Vincent and Eva Mastel; one brother, Andrew Mastel as well as two sisters, Rose Thome and Christine Stappler. Anne was born in Liebenthal, Saskatchewan on March 28, 1933. At an early age, her family moved to Medicine Hat and she has been proud to call Medicine Hat her home ever since! She worked many years with house- keeping in the Public School System and loved talking to all the kids at the various schools she worked in. Anne was a truly selfless individual whose memory will live on in the hearts of the many lives she had touched. Those wishing to pay their respects may do so at Cook Southland Funeral Chapel, 901 – 13 Street S.W., Medicine Hat, beginning at 6:00 p.m., one hour prior to the start of Vigil Prayers which will be recited on Sunday, May 1, 2016, at 7:00 p.m. The Funeral Mass will be celebrated at Holy Family Parish, 1451 Strachan Road S.E., Medicine Hat on Monday, May 2, 2016, at 10:30 a.m. with Reverend Father Philip Le celebrant. Interment will follow at Hillside Cemetery. (Condolences may be expressed by visiting www.cooksouth land.com) Honoured to serve the family is