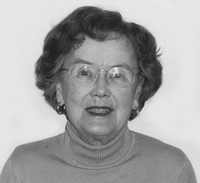 Noreen was born to Clara and J. T. Cuyler in Medicine Hat, Alberta and graduated from Alexandra High School in 1946. She received her Registered Nurse’s training at the Royal Alexandra Hospital in Edmonton (Class of ’49). After graduating she married her high school sweetheart Don Hargrave of Redcliff in 1950.

Noreen lived in Calgary much of her life and worked at the Alberta Children’s Hospital, Sarcee Auxiliary Hospital and the University of Calgary Student Health Services in Calgary, as well as the General Hospital in Medicine Hat. In addition, Don’s work in seismic exploration took them on an adventurous life of Doodlebugging in many far flung places such as Charlie Lake, B.C. (where she narrowly escaped a fire that destroyed most of the family’s possessions); Manning and Cardston, Alberta; Oran and Algiers, Algeria; Nairobi, Kenya; and Ascot, England.

Noreen cherished her family. She loved being in the company of her children, grandchildren and extended family and kept up with their lives through email and Skype when not able to be with them in person. Her many friends were important to her: her lifelong friends for over 80 years the JENIDS; her nursing classmates and colleagues; members of the Ostomy Society, the Redcliff Recall and the Dalrymple Hill S & B; her old neighbours from Hillhurst, Glamorgan and Dalhousie and her new friends at the Colonel Belcher retirement residence.

Her most enduring qualities were her love of people, her generosity, a quick sense of humour and her unflagging cheerfulness, even in trying circumstances. A descendant of early Dutch-American pioneers, she valued tidiness and cleanliness. In spite of her children, she kept her natural hair colour right to the end.

A Memorial Service will be held at McINNIS & HOLLOWAY (Crowfoot, 82 Crowfoot Circle N.W., Calgary, AB), on Saturday, April 30, 2016 at 2:00 p.m. Condolences may be forwarded through www.mcinnisandholloway.com. If friends so desire, memorial tributes may be made directly to the Heart & Stroke Foundation of Alberta, 100, 119 – 14th Street N.W., Calgary, AB T2N 1Z6 Telephone: (403) 264-5549, www.heartandstroke.ca or to the Ostomy Canada Society, 5800 Ambler Dr., Suite 210, Mississauga, ON L4W 4J4 Telephone: 1-888-969-9698, www.ostomycanada.ca would be appreciated. Her family would like to thank Dr. Karen Easton and assistant Colleen as well as all of her caregivers at the Colonel Belcher Residence and Care Centre, Foothills and Rockyview Hospitals and the Glenmore Park Care Centre for the wonderful care they gave Noreen over the past few years.