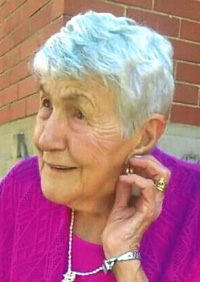 It is with great sadness that we announce the passing of our Mother, Eva MacDonald (nee Dockter) on Tuesday, April 26th, 2016 at the age of 88 years. Eva leaves to cherish her memory her children, Collin Ward MacDonald, Heather (Geoff) Barron, Lynne (Frank) Peloski and Scott MacDonald; grandchildren, Richard (Lindsay), Katrina, Danny, Melanie, Zoe (Kyle), Josh, Zachery and Cameron. She is also survived by her brother, Jake (Elaine) Dockter; her sister, Edna (Laurie) Barth; and one niece and four nephews. Eva was predeceased by her loving husband, Collin; an infant son; a brother in infancy; her parents, Christian and Katarina Dockter; her parents-in-law, Colin and Ethel MacDonald; and her sister, Frieda Dockter. Eva was born in Neudorf, Russia on January 19th, 1928 and immigrated to Canada with her parents in 1930. She grew up on a farm south of Dunmore until 1952. Mom and Dad married in 1956 and lived in Edmonton (two years), Winnipeg (three years), Medicine Hat and then Ralston until 1984 where they raised their family. In 1984, they moved to Suffield where they lived out the remainder of their lives. Mom worked as a seamstress at Joy’s Styles from 1971 to 1981 where she made many lasting friendships with both staff and customers. From 1981 to 1992 she worked at BATUS which she loved and had many great stories and memories from her time there. Some of Mom’s hobbies were sewing, knitting, crocheting, spinning and reading. Mom always had a quest for knowledge and her biggest regret was having to quit school at a young age to help at home when her mother became ill. Mom never gave up learning and loved expanding her mind through books. Mom was never one to do much traveling besides family summer holidays, the occasional trip to Winnipeg, and a trip to Germany. She was always happiest at home. Mom had a soft spot for animals and made sure no animal went without food or shelter. She always had time for her friends and neighbours…her door was always open with a cup of tea or coffee and some kind of baked goodies. The most important part of Mom’s life was family. Her children and grandchildren always brought a smile to her face. Eva’s life touched so many people and she will be missed by all. The Funeral Service will be held at SAAMIS MEMORIAL FUNERAL CHAPEL, #1 Dunmore Road SE, on Monday, May 2nd, 2016 at 1:30 p.m. with Reverend Nigel Tulley officiating. A Private Interment will take place on Tuesday at Saamis Prairie View Cemetery. Memorial gifts in Eva’s memory may be made to the SPCA, 55 Southwest Drive SW, Medicine Hat, Alberta, T1A 8E8, or to HALO, 12 – 49 Viscount Avenue SW, Medicine Hat, Alberta, T1A 5G4, or to the Medicine Hat Women’s Shelter Society, PO Box 2500 Lcd 1, Medicine Hat, Alberta, T1A 8G8. Condolences may be sent through www.saamis.com and to condolences@saamis.com subject heading Eva MacDonald. Funeral arrangements are entrusted to