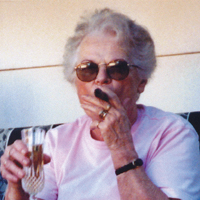 Katherine was born in Swift Current, Sask. on September 14, 1921, the fifth child of Alexandra and Nicholas Dola. She passed away peacefully on Saturday, April 16, 2016 in Leader Hospital. She was raised on the family farm in the Prelate area and married Anthony Scory on November 4, 1939. They moved to Virden, Manitoba where she honed her skills as a hairdresser. They returned to the Prelate area and set out to make and raise a family. In the early ’50s, the family moved to Leader where she has lived until her passing. She was totally dedicated to her family, and her six children were her pride and joy. She juggled home and career while raising and feeding her children, as well as hordes of their friends, and all with limited means. Her home, and particularly her kitchen, were always warm and welcoming. Mom loved flowers, as evidenced by her beautiful yard and indoor plants. Her magnificent rose garden and African violets were particular favorites. She was a member of the Leader United Church and UCW for more than 45 years. Mom enjoyed bowling and bingo, and watching her two favorite sports teams, the Leafs and Blue Jays, on TV. Many community functions were happy to receive donations of food from her kitchen. She enjoyed visiting with friends and the coffee pot and baked goodies were always at the ready when someone dropped by. Mom will be greatly missed by four sons: Roy (Lorraine) of Rimbey, Rodger (Melody) of Leader, Les (Dixie) of Calgary and Tim of Medicine Hat; and one daughter-in-law Barb of Leader. Also left to mourn her passing are ten grandchildren and five great grandchildren. She is also survived by one brother and one sister. She was predeceased by her parents, husband Tony, infant son Gerald, loving daughter Ruth and amazing son Garry, and one brother and four sisters. She was a gem of a lady – small in stature but she had a huge impact on everyone who was fortunate enough to know her.” Loved in life – celebrated in passing.” A funeral service was held on Thursday, April 21, 2016 at 1:00 p.m. at the United Church in Leader, SK. The interment took place at the Leader Cemetery, Leader, SK. For further information or to sign the family book of condolence, visit www.parksidefuneralhome.com. Arrangements were in care of Parkside Memorial Funeral Home – Ryan Cappelle