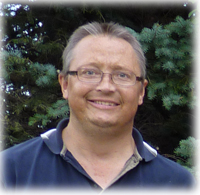 Paul Raymond Polisky of Medicine Hat, succumbed to his long battle with kidney disease on Wednesday, April 27, 2016, at the age of 46 years. Paul was born on July 1, 1969, and from the start was a bright and creative child. Before he started school, he loved to be read to and he would ask for the funny parts of stories to be pointed out to him. He was also very interested by science and would often be talking about interesting scientific questions. By the time he started school, he had taught himself to read and became a life long avid reader of all types of books. During school, Paul’s creativity showed through music and art. He studied piano at the United Conservatory of Music and played in their festivals in Calgary, Lethbridge and Red Deer. He earned his grade 8 Toronto Conservatory Certificate. When he was 11, Paul’s teacher, Sister Alfreda, noticed and nurtured his talent in art. She incorporated painting into her program and encouraged him to paint. That year, he had a piece chosen for the children’s art display. In later years, Paul struggled in school and had difficulty being understood or supported. Because of this, he went to Medicine Hat College to complete his grade 12. In this supportive environment, he excelled in chemistry, physics and math and he earned his advanced university entrance grade 12 diploma and enrolled in calculus. After years of dialysis, Paul received a kidney transplant in 2002. He enjoyed a few years of freedom from those appointments, woking for the city and travelling to visit family before he had to once again start dialysis. In his final months, Paul lived a quiet life. Between dialysis visits, he had coffee with friends and family and spent time reading and resting. Despite his medical treatment, Paul’s health deteriorated to the point where his life ended while in the hospital surrounded by family. Paul is survived by his beloved son, Austyn; parents, Ray and Mildred Polisky; sister, Lisa (Greg) Wallis and their children, Sophie and Lachlan; brother, Murray (Gina) Polisky and their children, Sam and Alex as well as numerous aunts, uncles and cousins. Those wishing to pay their respects may do so at Cook Southland Funeral Chapel, 901 – 13 Street S.W., Medicine Hat, beginning at 6:00 p.m., one hour prior to the start of Vigil Prayers which will be recited on Wednesday, May 4, 2016, at 7:00 p.m. The Funeral Mass will be celebrated at Holy Family Parish, 1451 Strachan Road S.E., Medicine Hat on Thursday, May 5, 2016, at 11:00 a.m. with Reverend Father Philip Le celebrant. Interment will follow at Hillside Cemetery. If friends so desire, memorial donations in Paul’s name may be made directly to the Kidney Foundation of Canada, 6007 – 1 A Street S.W., Calgary, Alberta T2H 0G5. (Condolences may be expressed by visiting our website at www.cooksouthland.com) Honoured to serve the family is