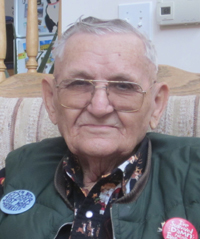 Theodore “Ted” Vockeroth of Medicine Hat, beloved husband of the late Lydia Vockeroth, passed away peacefully with his daughters by his side on Friday, April 29, 2016 at the age of 93 years. Ted leaves to cherish his memory two daughters, Myrna (Garry) Crawford of Regina and Wanda Vockeroth (Barry Watson) of Millarville, Alberta; two granddaughters, Jade and Brooke; one brother, Hubert (Elsie) Vockeroth of Medicine Hat; one sister, Agnes Coderre of Medicine Hat; as well as numerous nieces and nephews. Ted was predeceased by his wife, Lydia Vockeroth; his parents, William “Bill” and Charlotte Vockeroth; and two brothers, Roy Vockeroth and Charley Vockeroth. Ted was born on his parents’ farm near Hatton, the oldest of 5 children, on March 22, 1923. He attended Newport School, where he met his future wife, Lydia. They married in 1947 and farmed in the Surprise District of Saskatchewan for 28 years before retiring to Medicine Hat in 1975. Ted was an avid fisherman, curler, bridge and pool player. He curled several times a week, first in Schuler, Alberta and later in Medicine Hat, until the age of 90. He played bridge twice a week for many years. He was a talented bridge player, and held the high score in his bridge club for the month before he became ill. Ted had a sharp mind, and was diligent about doing daily crossword puzzles and Sudoku. He had a natural musical ability, and played the banjo, accordion, fiddle and harmonica. He loved carpentry and was a jack of all trades around the house and farm. There was nothing he couldn’t do if he applied himself to it. In his late 80’s, he taught himself how to cook. Family and friends looked forward to his specialty, chicken and dumplings. Ted had many friends including his “coffee club” at the A&W, his bridge club, the curling community and many others. He will be forever remembered for his positive outlook on life, his friendly personality, his cheerful demeanour and his sense of humour. He enjoyed life to the fullest, and was always ready with a joke or a witty response. Whenever he was asked how he was, he always responded with his trademark thumbs up sign and a verbal “A-1!” Ted’s family would like to extend a special thank you to Dr. Ahmad and the dedicated staff of the Dialysis Unit, Medicine Hat Hospital, who treated Dad with kindness and compassion, and cared for him like a family member. Those wishing to pay their respects may do so at SAAMIS MEMORIAL FUNERAL CHAPEL, #1 Dunmore Road SE, on Thursday from 7:00 to 9:00 p.m. The Funeral Service will be held at SAAMIS MEMORIAL FUNERAL CHAPEL, on Friday, May 6th, 2016 at 10:00 a.m. with Jim Hillson officiating. A private interment will take place at Saamis Prairie View Cemetery. Flowers are graciously declined but memorial gifts in Ted’s memory may be made to the Kidney Foundation of Canada, 6007 – 1A Street SW, Calgary, AB T2H 0G5. Condolences may be sent through www.saamis.com or to condolences@saamis.com subject heading Ted Vockeroth. Funeral arrangements are entrusted to