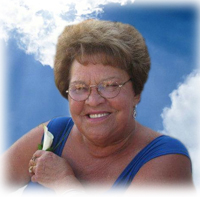 Pauline Freda Winters, beloved wife of the late Egbert “Epp” Winters, passed away in Redcliff on Monday, May 2, 2016, at the age of 75 years. She was born and raised in Medicine Hat where she completed all her schooling. Pauline married Epp in 1959, at Grace Lutheran Church in Medicine Hat, and settled in Redcliff where they raised their two children, Wendy and Paul. She resided in the same home all those years until the time of her passing. Pauline worked as a nurse’s aide, the glass factory and bartended at the Redcliff Legion for 30 years until her retirement. Regardless of how she was feeling, Pauline always wanted to put a smile on other people’s faces. She touched a lot of lives with her laughter and quick wit. Pauline was always making everyone smile with her “one liners” and provided the town with their daily dose of gossip at the Legion. In her early years, she loved camping and fishing in the old ford crankup as well as going to BINGO. Pauline enjoyed doing her daily “Redcliff watch” by cruising around town. She also liked painting Easter eggs and made Easter baskets every year for the family. When she was watching curling on TV, she was not to be disturbed or you would hear about it. Pauline especially enjoyed sharing time with her family during the holiday’s and in particular, had the time of her life in Mexico with friends and family and meeting new friends, “Salt & Pepper”. Pauline was a longtime member of the Ladies Auxiliary, Redcliff Legion, Branch #6. Pets were very important to her especially her grandcats and granddogger as well as Poco, Patches and Sasha. Pauline will be forever remembered in the hearts of her family; step-mom, Leona Cheret-Paprocky; daughter, Wendy (Mark) Renz and son, LouPaul Winters; grandchildren, Sierra (Joel) Ford, Shasteen (Dustin) Sader, Shalynn Winters, Tristen Winters; great-grandchildren, Emily, Kessa, Owen; siblings, Tommy (Gladys) Cheret, Armand (Sharon) Cheret, Forrest Cheret, Dollard Cheret, Zo (Bill) Drummond and Guy Pancoast. Pauline was predeceased by her husband, Egbert; mother, Olive Pancoast; father, Paul Cheret; step-father, Hugh Pancoast and brother, Larry Cheret. A private family interment has taken place at the Redcliff Cemetery. If friends so desire, memorial donations in Pauline’s name may be made directly to the Canadian Red Cross, Alberta Wildfire Appeal, 398 Aberdeen Street SE, Medicine Hat, AB. T1A 0R2. (Condolences may be expressed by visiting our website at www.cooksouthland.com) Honoured to serve the family is