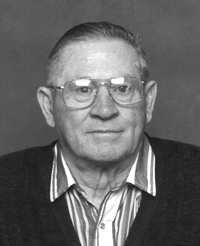 It is with heavy hearts that we announce the passing of our Father, Grandfather, Great Grandfather and brother. Dad passed away peacefully surrounded by family in Calgary. Cliff leaves behind his past wife Mary, 4 children; Charmaine of Calgary, Vicki (Ralph) of Medicine Hat, Barry (Loy) of Rocky Mountain House and Dwayne of Onaway, Alta. He also leaves behind 14 Grandchildren and 19 Great Grandchildren, as well as three sisters, Marlene of Red Deer, Lorraine (Gwen) of Lethbridge, Lois (Dave) of Edmonton and numerous nieces and nephews. Cliff is predeceased by his Parents and one son Terry. Cliff was a oilman as his father was before him. The legacy continues with his son Barry. He worked his way up from a roughneck to engineer. His work took him to Iran in the early sixties, as well as Quebec and Nova Scotia (where his picture appeared on the cover of oilweek!) in the seventies. He later had his own company called Blue Knight Enterprises. Dad was raised and lived throughout Southern Alberta and he will be happy to be laid to rest in an ancestral plot in Grassy Lake, Alberta. Right in the Heart of Southern Alberta. Our Family would like to thank the staff at Bethany Harvest Hills for the excellent care… he very much enjoyed his stay! In lieu of flowers, the family would appreciate donations being made in Cliff’s memory directly to the Alzheimer’s Society of Calgary, 222 58 Ave SW, Calgary, AB T2H 2S3 or the Bethany Harvest Hills 19 Harvest Gold Manor NE, Calgary, AB T3K 4Y1.

Messages of remembrance may be left for the family at www.southcalgaryfuneralcentre.ca