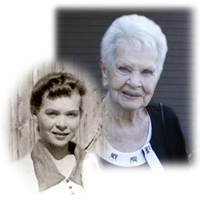 Mrs. Ruth Marie Dumont (nee Schulz), beloved wife of the late Mr. John Leonard “Jack” Dumont, passed away peacefully at the St. Joseph’s Home – Carmel Hospice on Sunday, May 22, 2016, at the age of 95 years. Left to cherish Ruth’s memory are her four children and their families: Daughter – Deanna Anderson and her family: Sean Anderson (Deb Coroluick), Loretta Anderson (Brent Early) and Loretta’s kids, Micheal (Korissa) Anderson and Micheal’s son, Anson; Montana Anderson and her daughters, Dani, Madison and Sadie; Devon Anderson (Michaela); Son – Leonard (Pat) Dumont and their family: John (Elaine) Dumont and their kids, Josh, Elyse and Lauren; Nicole (Corey) O’Brien and their kids, Morgan and Nicholas; Daughter – Cindy (Doug) Murray and their family, Amber (Jody) Mead and their son, Skyler; Daughter – Sandi (Dwayne) Pfeifer and their family: Courtney (Chad) Thompson and their kids, Brevyn and Meara; Ryan (Breanne) Pfeifer. She is also survived by a sister-in-law, Frances Wilson; special friend, Edna Martin as well as numerous nieces, nephews and cousins. Along with her husband, Jack, Ruth was predeceased by her son-in-law, Don Anderson; grandson, Ron Anderson and her siblings, Wilfred Schulz, Minnie Stadel, Billie Schulz, Rosie Brace, Charlotte Jans, Esther Weiss and Lilia Arnold. Ruth was born on the family farm near Maple Creek, SK., the 7th of 8 children to Frank and Emma Schulz, on April 28, 1921. She lived in the Maple Creek area until she was 18. This is also where she met John Leonard Dumont and they were married on May 8, 1940. The first number of years together they lived a very Nomadic lifestyle which included a move to Wildhorse before finally making their home in Redcliff in 1942. During these years, Ruth proved she was a true homemaker who could literally turn anything into a home, no matter how rough or rugged it was to begin with! Once in Redcliff, she gained employment with Dominion Glass, continuing to work there for a number of years until retiring in 1985. Everyone who knew Ruth also knew she could be a very funny lady! Her incredible sense of humour and kind, giving nature have been etched into the lives of her children and their families, greatly contributing to who they are today. Family will forever treasure the memories of time spent with Ruth during her final days at St. Joseph’s Home, especially her big smile, beautiful twinkling blue eyes, soft skin and her small, gentle hands. A special thank you goes out to the nurses and staff at St. Joseph’s Home – Carmel Hospice for the loving attention and assistance that Ruth received while in their care. Those wishing to pay their respects may do so at Cook Southland Funeral Chapel, 901 – 13 Street S.W., Medicine Hat on Wednesday, May 25, 2016, between 7:00 p.m. and 8:00 p.m. Visitation will also be offered starting one hour prior to the Celebration of Ruth’s life which will be held at Cook Southland Funeral Chapel on Thursday, May 26, 2016, at 2:00 p.m. with Life Celebrant Gerry Getz officiating. Interment to follow at the Redcliff Cemetery with fellowship continuing thereafter in the Cook Southland Reception Facility. (Condolences may be expressed by visiting www.cooksouthland.com) If friends so desire, donations in memory of Ruth may be made to the St. Vincent De Paul Society care of Holy Family Parish, 1451 Strachan Road S.E., Medicine Hat, Alberta, T1B 4V3. Honoured to serve the family is

One Condolence for “RUTH MARIE DUMONT”