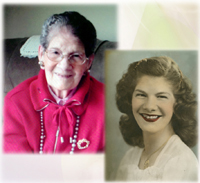 Judy Tanner, passed away peacefully at the Good Samaritan South Ridge Village, Medicine Hat, on Tuesday, May 25, 2016, with family by her side. Judy was born on December 25, 1924, in Winnipeg, Manitoba, the fifth eldest of fifteen children. She married Herbert Roller on February 21, 1947 and had three children. After their separation and divorce in the early 1960’s, Judy moved from Kenora, ON., to Medicine Hat, AB. A year later she was joined by her three children, whom she cared and provided for over the next several years. In 1969 Judy married Hugh Tanner. Judy and Hugh lived in a number of Alberta towns and cities over the next 30 years, owning and managing hotels and motels, until Hugh’s passing in 1997. Judy remained in Calgary until 2005, at which time she moved back to Medicine Hat, where she spent her remaining years. Judy is survived by her daughter, Naida Roller; son, Bryan (Colleen) Roller; and daughter, Patricia Roller; grandchildren, Karen Roller, Elise Roller, Keith Roller and great-grandson, Finlay Bennett as well as eight siblings, Dorothy Clark, John Crouch, Larry Crouch, Mina Blackall, Jim Crouch, Diane Tessaro, Lenore Parr, and Linda Parr. Judy was predeceased by her father, Charles Henry Crouch; mother, Lizzie Laurence Crouch; first husband, Herb Roller; her second husband, Hugh Tanner; siblings Ron Crouch, Margaret Witala, Grace Bailey, May Dewar, David Crouch, Robert Crouch; and grandson, Christopher. In her later years Judy struggled with dementia and failing health, but was comforted by her strong faith in Jesus. She will be fondly remembered for her infectious laughter and held in honour by her family for the many sacrifices she made raising three children as a single mother. A special thank you to the nurses and staff at Good Samaritan’s South Ridge Village for the loving attention and assistance that mom received while in their care. A private family service will be held at a later date. If friends so desire, memorial donations in Judy’s name may be made directly to the Good Samaritan’s Society, 550 Spruce Way S.E., Medicine Hat, AB., T1B 4P1 or the Medicine Hat Home Care, 3330 – 13 Avenue S.E., Medicine Hat, AB., T1B 1H8 or to AJ’s Loan Cupboard, P.O. Box 45006, McKenzie Postal Outlet, Medicine Hat, AB., T1A 7H3 (Condolences may be expressed by visiting www.cooksouthland.com) Honoured to serve the family is