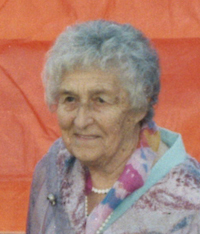 Dora Ruth Kinzell (nee Buckley), beloved wife of the late Bud Kinzell, passed away in Taber on Thursday, May 26, 2016 at the age of 97 years.

The Funeral Service will be held at The Church of Jesus Christ of Latter-day Saints, Taber Stake Centre, 4709 – 50 Avenue, Taber on Thursday, June 2, 2016 at 2:00 P.M. Condolences may be forwarded by visiting our website at www.southlandfuneral.com.

Dora was born in Taber on December 10, 1918 to Marcus Frank and Emily Annie Buckley (nee Perry). She grew up on her grandparents ranch with her brother Frank. They attended school in Vauxhall. At the age of twenty one, Dora and her good friend Francis Bennett enrolled in the army. Dora met her future husband Clifford “Bud” Kinzell while on days off in Calgary. They were married July 1947. After they were married, Dora enrolled in a nursing aid program and upon completion worked in Drumheller, Medicine Hat and Taber. Dora and Bud took in and raised their nephew Lyle Buckley and in later years raised Lyle’s children Twila and Lynden Buckley. They continued farming until Bud’s passing on September 19, 2001. At age ninety, Dora moved to Taber, residing at the Clearview Lodge where she enjoyed the company of the residents and also friends visiting in addition to the recreational activities offered by the lodge. Dora will be remembered for her stories of ranch life and later farm life and had a compassion not only for people, but also animals, especially cats. She enjoyed fishing and loved painting, which is reflected on the walls of her room.