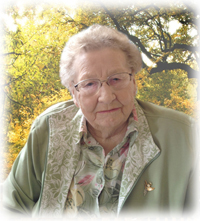 1931 ~ 2016
Mrs. Rosie Luscombe, beloved wife of Mr. Cecil Luscombe, passed away at the Riverview Care Centre on Saturday, May 28, 2016, at the age of 85 years. Rosie was born in Balcarres, SK., on January 7, 1931 and attended Violet School. She had eight siblings and her nickname growing up was “Tootsie”. Rosie married Cecil on April 18, 1952 and moved to Redcliff to raise their six children. The family attended Gordon Memorial Church where Rosie also sang in the choir and was a member of the Evening Circle group. She sang in the choir that would entertain different groups and volunteered at various senior homes. She was an avid knitter, loved to crochet and sewed most of her kids’ clothes when they were young. Rosie was a cancer survivor and overcame many health obstacles. Besides her loving husband, Cecil, Rosie will be lovingly remembered by her children, Dwight (Audrey) Luscombe and their children, Sheldon, Tannis and Deanna; Garth (Mary-Anne) Luscombe and their children, Chad, Tyler and Kendra; Dale (Debbie) Luscombe and their children, Derek and Dustin; Fay McGregor and her children, Kaylynn and Braden; Donna Engel (Doug) and her children, Tiffany and Andraes; Sheila Olson, and her children, Amanda and Brandon; 21 great-grandchildren; three sisters, Liz, Edna and Tillie as well as numerous nieces and nephews. Rosie was predeceased by her parents; son-in-law, Jim; great-granddaughter, Abigail and five siblings. The Funeral Service will be held at Cook Southland Funeral Chapel, 901 – 13 Street S.W., Medicine Hat, Alberta on Thursday, June 2, 2016, at 1:00 p.m. with Reverend Blaine Schaufele officiating. Interment will follow at the Redcliff Cemetery. (Condolences may be expressed by visiting our website at www.cooksouthland.com) Honoured to serve the family is