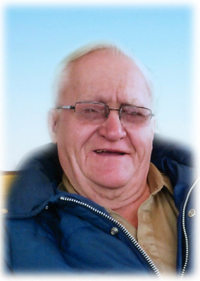 Mr. Aevult Schlenker, beloved husband of the late, Eileen Schlenker, passed away at the Medicine Hat Regional Hospital on Tuesday, May 31, 2016, at the age of 87 years. Aevult leaves to cherish his memory, two daughters; Barbara (Graham) Skjenna and Sherry (Scotty) Irvine; one granddaughter, Aura Skjenna and one great- granddaughter, Annika Magistad; sister, Isabelle Deringer; niece, Deborah Deringer and nephew, Keith (Brenda) Deringer as well as numerous cousins. Aevult was predeceased by his wife, Eileen on March 31, 2000, and his parents, Ida & Rudolf Schlenker. Aevult was born on October 28, 1928, in Sofiewka, Bessarabia and emigrated with his parents to Canada in 1929. He attended State School and later went on to Dauntless School. Aevult married Eileen Elma Kerbs on September 3, 1949, and lived on a farm with his parents for seven years near Bullshead. Later, they purchased land, built a house and began developing their farm in Cypress County just south of Medicine Hat. Aevult also bought land in the County of Forty-Mile (Whitla) and farmed both irrigation and dryland crops, raising a small herd of Hereford and Angus cattle. In 1957, he pursued his dream of flying and achieved his private pilot’s license. In 1958, Aevult purchased his first airplane and built a hangar and landing strip for it. Flying remained the passion in his life, continuing soaring through the clouds well into his later years. Aevult was a focused and precise person, a talented handyman and was able to repair anything and turn his hand to making necessary parts that were no longer available for older equipment. He loved animals and always had a kind heart for a stray found wandering in the field or along a ditch. In 1973, Aevult sold the irrigation farm home place and semi-retired to Medicine Hat. He continued farming the dryland and later rented it out, leaving him more time to pursue winter travels, summer camping and fishing up until shortly before his passing. A father, grandfather, great-grandfather and friend, he will fondly be remembered and sadly missed by all who knew him. The funeral service will be celebrated at St. Paul Lutheran Church, 515 Sprague Way S.E., Medicine Hat, on Friday, June 3, at 2:00 P.M., with Pastor Ken Edel officiating. Interment will follow at Hillside Cemetery. For those wishing to pay their respects may do so one hour prior to the beginning of the service starting at 1:00 p.m. If friends so desire, memorial tributes in Aevult’s memory, may be made directly to the charity of ones choice. (Condolences may be expressed by visiting our website at www.cooksouthland.com). Honoured to serve the family is

One Condolence for “AEVULT SCHLENKER”