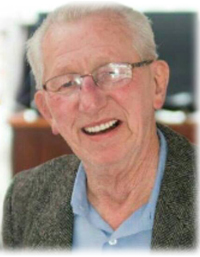 Emmett Lawrence (Larry) Driscoll, beloved husband of Jo-Ann Driscoll, passed away at the Medicine Hat Regional Hospital on Monday, May 30, 2016, at the age of 74 years. Emmett was born on January 28, 1942, in Kingston, Ontario. In 1969, he moved out west to Calgary. In 1981 he met Jo-Ann Williams. He was the love of her life and they were married in 1988. They worked for many years in Calgary but retired in 2001 to Medicine Hat and made it their home – he truly loved living in Medicine Hat! Emmett (Larry) was a unique individual who loved a good joke. He was outgoing and with his upbeat personality, people were naturally drawn to him. He enjoyed life and all it had to offer – from raising pigeons to being a sports fanatic. He loved hockey and knew all the players on all the teams, especially his favorite team, the Chicago Blackhawks. He was often sought after for his keen intuition when it came to picking players for hockey pools. Emmett’s carefree look on life and happy-go-lucky attitude will be deeply missed by his loving wife, Jo-Ann; children: son, Robert (Linda) Driscoll and their family, Natasha (Spenser) and their children, Logan and Londyn; Tonya (Ryan) and Shane (Katie) their soon to arrive child; daughter, Lisa Driscoll and her son, Justin (Brandy) their daughter Ava Lynn and their soon to arrive daughter; son, Lawrence (Charlene) Driscoll; daughter, Michelle Driscoll (Bill) and daughter, Jordan; two brothers, James Driscoll, Danny Driscoll; two sisters, Barb Colby and Eileen Sevenson as well as numerous nieces and nephews. He was predeceased by his parents, Robert and Gertrude Driscoll, brothers Art Driscoll, Chuck Driscoll, sisters Betty Driscoll and Pearl Driscoll. A Potluck Celebration in honour of Emmett’s life will be held at the Driscoll residence located at 1029 Balmoral St. S.E., Medicine Hat on Saturday, June 4, 2016, beginning at 12:00 noon. (Condolences may be expressed by visiting our website at www.cook southland.com) Memorial donations in Emmett’s name may be made directly to the Alberta Children’s Hospital, 2888 Shaganappi Trail N.W., Calgary, Alberta, T3B 6A8. Honoured to serve the family is