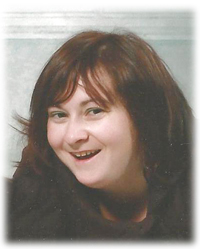 Anastasia Ophelia Glockner (nee Skorobohach) passed away peacefully in her mother’s arms on Saturday, May 28, 2016, at the Medicine Hat Regional Hospital at the age of 36 after a long battle with cancer. Anastasia was born on February 4, 1980; she was the first daughter to Donald and Carol. Anastasia grew up on the family farm at Goodeve, SK. She was involved in ballet, Ukrainian dancing, skating, swimming, and downhill skiing. As a child, Anastasia enjoyed spending time with her brother and sisters. Anastasia enjoyed travelling: at a young age she went to Vancouver with her dad to visit her uncle and aunt. A few years later her mom took her and brother, Fred to Expo 86 in Vancouver. These are trips that she still had talked about. She attended school in Goodeve to grade 9 then attended high school at Melville Comprehensive High where she graduated grade 12 in June of 1999. After graduation, Anastasia attended Olds College in Olds, AB. where she took a 1-year fashion design course…she had always dreamed of becoming a designer. She moved to Calgary after her course was completed and worked at a boutique downtown, and then for The Hudson’s Bay Company. After a few years of working, Anastasia decided to take Media Studies at SAIT (Southern Alberta Institute of Technology), where she met the love her life – Steven. Using her Media Studies training, Anastasia worked for a local newspaper in Medicine Hat as a reporter. She was also employed later at Syncrude in Fort McMurray AB. Anastasia and Steven were married in Yorkton, SK on August 23, 2008. They had three beautiful children: William in 2009, Sophie in 2010, and Eva in 2012. Sophie unfortunately was stillborn. Her children were her world; she enjoyed taking them to all their activities and volunteering with the clubs they were part of. Most of all, Anastasia and Steven enjoyed many holidays together to Niagara Falls, Vegas, Vancouver, Nelson, BC., Mexico, west coast USA, Hawaii, camping in Saskatchewan, Alberta and B.C., and skiing the Rocky Mountains. Anastasia is survived by her loving husband Steven; her son, William and her daughter, Eva; her parents, Donald and Carol Skorobohach of Goodeve, SK; brother, Fred (Amanda) Skorobohach and their children, Celina, Lilianna, Isabella, Thomas, Napoleon, and Nicholas of Goodeve, SK; her sisters, Petrunia (Steven) Olson of Goodeve, SK, Tatania (Tyler) Purves their children, Aiden and Jacob of Saskatoon, SK, Avrillia (Chris) Greer and their son, Ethan of Saskatoon SK, Olivia Skorobohach (Scott Spilak) of Yorkton SK and Sonia Skorobohach (James Craig) of Yorkton SK; her in-laws Bill and Joan Glockner of Medicine Hat; sister-in-law, Beth (Kirk) Heckkner and their children, Sunny and Donovan; Steven’s grandparents, Betty Wiedemann and John and Rita Glockner as well as numerous other aunts and uncles. She was predeceased by her daughter, Sophie; her Gido and Baba, John and Ann Skorobohach; her uncle Gordon and aunt Joan Skorobohach, nephew, Frederick Skorobohach and Steven’s uncle Greg Wiedemann. The Funeral Service was held on Friday, June 3, 2016. Memorial donations in Anastasia’s name may be made directly to the Canadian Cancer Society. Honoured to serve the family is

One Condolence for “ANASTASIA OPHELIA GLOCKNER”