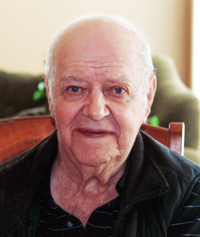 It is with heavy hearts that we say goodbye to our father, grandfather and great grandfather Daniel Kress, beloved husband of the late Alarine Kress, on Tuesday, May 31, 2016 at the age of 88 years.

The Funeral Service will be held at St. Michael’s Catholic Church, 1113 – 1 Street East, Bow Island on Wednesday, June 8, 2016 at 11:00 A.M. Burial to follow at the Bow Island Cemetery. Condolences may be forwarded by visiting our website at www.southlandfuneral.com. Dan is survived by his daughters Donna Shield, Debbie (John) Middleton-Hope and Darla (Brian) Stensrud of Bow Island, daughter-in-law Karen Kress, eleven grandchildren and twelve great grandchildren. He is also survived by his brothers Leo (Henrietta) Kress, Benjamin (Margaret) Kress and David (Eva) Kress as well as numerous nieces and nephews.

He was predeceased by his wife Alarine in 2010, son Dwight Kress in 1986, parents Paul and Barbara Kress and nine of his siblings.

Dan was born June 27, 1927 near Val Marie, Saskatchewan to Barbara and Paul Kress. He was the seventh of thirteen children. Dan and Alarine were married in 1950 in Masefield, Saskatchewan and soon after, they moved and began farming in Hays. In 1967, Dan was employed by the United Grain Growers and was asked to relocate to many different communities. Over the next ten years, they moved to Queenstown, Raymond, Granum and finally Bow Island in 1978. Upon his retirement they purchased a home in Taber and stayed there until their final move back to Bow Island, where they resided until their time of passing.

As a young man, Dan was involved in rodeo, baseball and hockey. He was active in the community as a 4-H club leader, served on the school board and coached hockey and competitive women’s slo-pitch. Dan and Alarine enjoyed gardening, curling, camping and playing crib together. He was also a devoted New York Yankees fan and never gave up hope for the Toronto Maple Leafs.

Dan was a strong supporter of his children’s and grandchildren’s activities. He went to as many of their hockey and baseball games as he could. He also loved to play the harmonica and sing.

If friends so desire, memorial tributes in Dan’s name may be made directly to a charity of one’s choice.

One Condolence for “DAN KRESS”