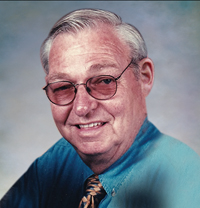 Don was a faithful husband and father, he loved fast cars and fast boats. He was an eternal optimist, dreamer, adventurer, original problem solver, loyal friend, practical joker and Inventor. With Don around everyone found themselves embarking on adventures, escapades, and practical jokes. Always an optimist, he directed endless encouragement towards his wife (Stella), daughters, grandchildren, employees, and friends.

Don was born on October 29, 1931 at Elkwater Lake in Cypress Hills of Alberta. He was the son of Atherton Percival (Sonny) Kennard and Mildred Loretta Ellefson. His family moved to Medicine Hat, Alberta in 1936. Don attended Alexandra High School where he met his future wife, Stella Anne Diaczyszyn. After high school Don went to work with his father on the Canadian Pacific Railroad. Don owned and operated Don Kennard’s Esso in Medicine Hat, and Lake Bonivista, in Calgary. He also formed the company Kennard’s Automotive and Marine where he sold boats to almost everyone at Elkwater Lake. Don came from a family of golfers and he was pleased and proud to help his father Sonny Kennard created the Elkwater Golf Club. When Don retired from the service station and auto-marine business, he went on to work another ten years with Dwaine Barclay of Cam-Tech Industries.

Don was a true outdoorsman: he was an accomplished fisherman, hunter and boater. He developed a love for salmon fishing and spent many weeks in Nanoose Bay, British Columbia on his fishing boat “Sundancer”. For his 70th birthday Don achieved his dream and drove the “Sundancer” through the Inside Passage from Vancouver Island to Alaska.

Most of all, Don was a family man who devoted his life to his wife and to raising his three girls, Kathy, Donna Lynn and Susan.

Funeral Services will be held at McINNIS & HOLLOWAY (Fish Creek, 14441 Bannister Road S.E.) on Wednesday, June 8, 2016 at 11:30a.m. Flowers are always appreciated or you can make a donation to the Pacific Salmon Foundation in memory of Don Kennard. http:psf.ca/blog/donald-percy-kennard-memorial-fund.

One Condolence for “KENNARD, Donald Percy”