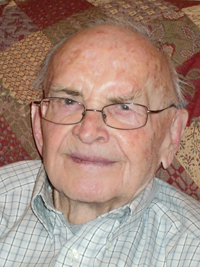 HUBERT (HUGH) ELWYN BELSHER APRIL 8, 1925 passed away peacefully June 4, 2016 at the age of 91. Hugh was born on the farm at McCord, SK and was the 9th of seventeen children in a loving and musical Christian household. As a teenager, he enlisted in the Royal Canadian Air Force but when he was diagnosed with an irregular heartbeat, joined the Canadian army during WWII. While stationed in Edmonton, he met the love of his life Jean (Whiteside) on a double-date in June of 1944 and they married two months later. In 1957, Hugh graduated from the University of Saskatoon with a degree in pharmacy and moved his family to Medicine Hat where he owned and operated Belsher’s Pharmacy Ltd. from 1958 to 1978. He was a principled man who never sold cigarettes in his drugstore because he believed smoking caused lung cancer and wanted to promote health for his customers. He took care of his patients and enjoyed the stability of the business so he could provide for his family. He loved Medicine Hat and gave back to the community by serving two terms as alderman, a member of Kiwanis and the Gideons. But as important as community service was to him, nothing was more special than spending time with his family. He and Jean made sure their family knew they were loved unconditionally. Even after putting in long hours at the pharmacy, he made sure to spend quality time with his wife and seven children through music, snow skiing, boating, camping or water skiing. He was a quiet and soft-spoken man who loved bird watching, and yet he was also a fiercely competitive backgammon and card player. In 1978, Hugh bought land in Peers, Alberta to raise cattle while working part time at the Whitecourt Hospital as pharmacist and then later in Calgary where he worked at the General Hospital before retiring in 1993. In retirement, he built his own home on an acreage outside Stettler before returning to Medicine Hat. After the passing of his wife, Jean in 2008, Hugh soon became a resident of the Lodge at Valley Ridge in Calgary where he enjoyed the many games of pool, crib and bridge with his friends. From his childhood on the farm, to his days as a father, grandfather, great-grandfather and great-great-grandfather, Hugh leaves a lasting impact as a family man who will be deeply missed by many, including: Jeanne (Bob) Smith, Greg (Cindy) Belsher, Colleen (Bryan) Roller, Lorie-Lyn (Keith Robson) Wilcox, Shelley (Pat) Michael, Shari (Kevin) Jangula, Nelson (Joella) Belsher and his 22 grandchildren and their spouses, 24 great-grandchildren, and 3 great-great-grandchildren. Hugh is also survived by 8 siblings, Fran Shattuck, Ursula Donaldson, Doris Ruscheinski, Ken (Betty) Belsher, Don (Joyce) Belsher, Margaret MacKenzie, Gwen (Glenn) Dods, and Doug (Annette) Belsher and many, many nieces and nephews. He was predeceased by his parents, William and Maria Belsher, and siblings, William Jr, Nita, Charles, Evelyn, Art, Alice, Mervyn, and Lawrence. Memorial service to be held on June 18, at 1:30 pm at Eden Brook Memorial Gardens, 24223 Township Rd 242, Calgary, AB. Donations in lieu of flowers can be made to Camp Harmattan, or to New West Symphony & Chorus

Condolences may be forwarded to the family by visiting www.edenbrookcemetery.ca.

One Condolence for “BELSHER”