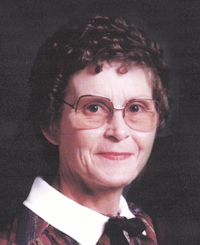 Yevonne Margaret Dent of Medicine Hat, beloved wife of Robert Kenneth Dent, passed away peacefully surrounded by family at the Medicine Hat Regional Hospital on Saturday, June 11th, 2016 at the age of 85 years. Along with Robert, Yevonne leaves to cherish her memory four children, Fred (Tallis) Dent, Doug (Nancy) Dent, Janet (Art) Pinnell and their families and Rhonda Dent (deceased). Yevonne is also cherished by four siblings, Bernice Stamp (Glen, deceased). Moira Mannerfelt (Eric, deceased), Ian (deceased) Phyllis Cole and Violet (deceased); brother-in-law, Norm (Betty) Dent. Yevonne is also survived by seven grandchildren, Rhys Dent, Dylan (Hanul) Dent, Scott (Kristen) Dent, Suzanne (Jerry) Blumhagen, Kevin (Darlene) Dent, Matthew (Christy) Pinnell and Jay (Jennifer) Pinnell; and many great grandchildren. Yevonne was born May 10th, 1931 to Elmer and Ina Cole in Hespero, Alberta. She spent her childhood on the family farm where she developed her diligent work habits and personality. Later, Yevonne moved to Calgary where she worked as a hairdresser. While working in Calgary, she met the love of her life, Robert Dent. They were married February 1st, 1951. With Robert enlisted in the army, they made many moves around Canada including Toronto, Calgary and finally Medicine Hat. Yevonne loved the outdoors especially going camping and working around the yard. She also spent many years in housekeeping at a local motel which she enjoyed thoroughly, as a clean house was her pride and joy. A Celebration of Yevonne’s Life will be held at SAAMIS MEMORIAL FUNERAL CHAPEL, 1 Dunmore Road SE, on Friday, June 17th, 2016 at 1:30 p.m. with Gary W. Goran officiating. A Private Interment will take place at Saamis Prairie View Cemetery. In lieu of flowers, memorial gifts in Yevonne’s memory may be made to the Alberta Heart & Stroke Foundation 124, 430 – 6th Avenue SE Medicine Hat, Alberta T1A 2S8. Condolences may be sent through www.saamis.com or to condolences@saamis.com subject heading Yevonne Dent. Funeral arrangements are entrusted to