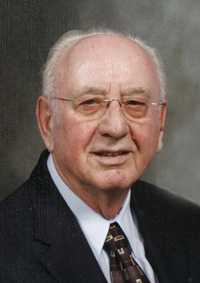 Boyd Clifford Mattheis of Medicine Hat, beloved husband of the late Darline Mattheis, passed away on Friday, June 17th, 2016 at the age of 89 years. Boyd leaves to cherish his memory one son, Lyndon (Cindy) Mattheis; one daughter, Karmen (Tom) Reyes; one grandson, Christopher Reyes; one sister, Mary Litke; as well as numerous nieces and nephews. Boyd was predeceased by his wife, Darline; his parents, Ludwig and Lydia Mattheis; one brother, Albert (Emma) Mattheis; one sister, Lillian (Gilbert) Bye; and one brother-in-law, Leon Litke. Boyd was born on December 23rd, 1926 in Hilda, Alberta where he was raised and educated. He married Darline Krenzler on June 3rd, 1957 and together they settled on the family farm in Hilda before retiring to Medicine Hat in 1988. Boyd will be fondly remembered by his family and friends. Those wishing to pay their respects may do so at SAAMIS MEMORIAL FUNERAL CHAPEL, 1 Dunmore Road SE, on Sunday from 1:00 until 1:55 p.m. The Funeral Service will be held at SAAMIS MEMORIAL FUNERAL CHAPEL, on Sunday, June 26th, 2016 at 2:00 p.m. with Pastor Dennis Braun officiating. Interment will follow at Saamis Prairie View Cemetery. Memorial gifts in Boyd’s memory may be made to the Alberta Heart & Stroke Foundation, 124, 430 – 6th Avenue SE, Medicine Hat, Alberta, T1A 2S8. Condolences may be sent through www.saamis.com or to condolences@saamis.com subject heading Boyd Mattheis. Funeral arrangements are entrusted to