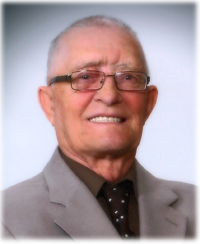 With sadness the family announces the passing of Michael Lanz, beloved husband of Anna Mary Lanz, on Monday, June 27, 2016, at the age of 87 years. Mike was born on the farm near Lancer, SK. on June 23, 1929. He left home at the age of 15 years to work as a farm hand for five years, then moving on to work in a service station for the next 10 years. This is where his aptitude as a mechanic was nurtured and for the next 37 years he worked as a heavy duty mechanic. Mike married the love of his life, Anna Mary Fauth, on December 3, 1979, spending 39 blissful years together. They enjoyed dancing, camping and spending time both together and with their friends. Michael loved riding and breaking horses as well as fishing, especially with his father-in-law, John, as they once caught 18 pike in two days. There were many special occasions that became fond memories for Mike, but one highlight was his 87th birthday when his children came home to surprise him. Mike will forever be remembered in the hearts of his wife, Anna; children, Janet (Lou) Querin, Robert (Laurie)  Lanz, Barry (Heather)  Lanz, Jennine (Ted) Skelton, Brent (Julie) Lanz; step-children, Robert (Angie) Melbourn, Alan Melbourn and all his grandchildren; siblings, Veronica+ (Adam+) Hoffner, Anton+ (Clara) Lanz, John+ (Isabell) Lanz, Margaret (Adam+) Loren, Frank (Elizabeth+) Lanz, Elizabeth (Louis+) Trotter, Clara+ (Jack) Heck, Christian+ (Irene) Lanz (Christian’s first wife, Thelma Lanz+), Carol (Stanley+) Skidmore, Stephen Lanz+ (Charlotte Lee) and numerous nieces and nephews. Mike was also predeceased by his parents, David and Anna Lanz. A Celebration of Michael’s life will be held at Cook Southland Funeral Chapel, 901 – 13 Street S.W., Medicine Hat, on Thursday, June 30, 2016, at 2:00 p.m. with Life Celebrant Gerry Getz officiating. Columbarium placement to follow at Hillside Cemetery. If friends so desire, memorial donations in Mike’s name may be made directly to the Alberta Lung Association, P.O. Box 4700, Stn South, Edmonton, AB. T6E 9Z9. (Condolences may be expressed by visiting our website at www.cooksouthland.com) Honoured to serve the family is