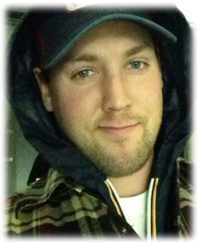 With heavy hearts the family of Neil Balmer announce his passing in Medicine Hat on Friday, July 1, 2016, at the age of 31 years. Neil was born in Medicine Hat on November 13, 1984. This is where he grew up, graduating from Monsignor McCoy High School in 2002, later attending Medicine Hat College. Neil worked for a number of years with DRC Construction where he truly valued the support and guidance of his employer. Most recently he was employed with the City of Medicine Hat. From a young age Neil was enthusiastic about graphic novels and was fascinated by the superheros that lived in the pages – Batman in particular. Over the years he attended ‘Comic Cons’ and once snuck into one of the conventions! He liked to go camping with family and a trip to Mexico was one that he really loved. Neil was talented in many ways… he was very artistic and and was known for the random sketches he would leave when he visited. He was also quite the skateboarder and wasn’t afraid to test his skills on the half pipe or off the garage roof! Neil was a naturally pleasant young man who got along and was well liked by all different kinds of people as he connected with everyone he met. He had a great sense of humor with a quick wit to match and people were simply drawn to him. While he had everything going for him, mental illness and an addictive personality eventually diminished the character that was Neil. As his mental health weakened, his addictions grew stronger and his life became unstable. Although there were some negative aspects to his life, there were also a lot of postives and he will always be lovingly remembered by his parents; father, Russell (Laura) Balmer, mother, Kym (Kevin) Porter; sisters, Erica Balmer, Grace Porter and Coreen Riley as well as numerous aunts, uncles, cousins and friends. Neil was predeceased by grandpa and grandma, Smith and grandpa and grandma, Balmer. A Celebration of Neil’s Life will be held at Cook Southland Funeral Chapel, 901- 13 Street S.W., Medicine Hat on Thursday, July 7, 2016, at 11:00 a.m. with Life Celebrant Gerry Getz officiating. (Condolences may be expressed by visiting our website at www.cooksouthland.com) Memorial donations in Neil’s name may be made directly to the Canadian Mental Health Association, 204, 1865 Dunmore Road S.E., Medicine Hat, Alberta, T1A 1Z8. Honoured to serve the family is

Leave a Condolence for Glenda Syrota