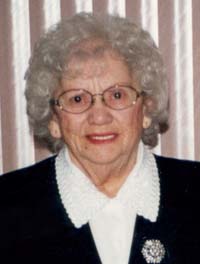 With our deepest sorrow we announce the passing of Edna Zollner on Thursday, July 14th, 2016. She is survived by her one son, Ronald (Kathy) Zollner and two granddaughters, Rachelle (Ryan) Beck and their children Nathan, Rylan and Shaylee Beck of Medicine Hat, and Jolene (Benj) Heinrichs of St. Albert, Alberta. She is also survived by her sister, Violet Diebert; her brother, Ben (Madeline) Herter; and one sister-in-law, Leona Herter; as well as numerous nieces and nephews. Edna was predeceased by her husband, Jacob “Jack” Zollner; her parents, Edward and Mary Herter; two brothers, Edwin and Lloyd Herter; one brother-in-law, Hilbert Diebert; and one sister-in-law, Esther Herter. Edna was born on May 11th, 1925 in the Golden Prairie, Saskatchewan District. They moved to Medicine Hat in 1946. She worked in some small grocery stores. Edna enjoyed crocheting, knitting, embroidery, quilting, and crossword puzzles. Those wishing to pay their respects may do so at SAAMIS MEMORIAL FUNERAL CHAPEL, #1 Dunmore Road SE, on Sunday from 7:00 to 9:00 p.m. and at VICTORY LUTHERAN CHURCH, 2793 Southview Drive SE, on Monday from 12:30 to 1:25 p.m. The Funeral Service will be held at VICTORY LUTHERAN CHURCH on Monday, July 18th, 2016 at 1:30 p.m. with Diaconal Minister Lila de Waal officiating. Interment will follow in the family plot at Hillside Cemetery. Memorial gifts in Edna’s memory may be made to the charity of one’s choice. Condolences may be sent through www.saamis.com or to condolences@saamis.com subject heading Edna Zollner. Funeral arrangements are entrusted to