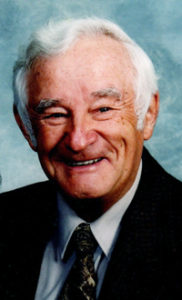 Harold Henry Cash of Medicine Hat, beloved husband of Leah Cash, passed away on Wednesday, July 20th, 2016 at the age of 90 years. Harold leaves to cherish his memory his four children, Milton (Karen) Cash of Medicine Hat, Myron Cash of Redcliff, Lorna (Claire) Schattle of Stump Lake, Saskatchewan, and Arlin (Connie) Cash of Seven Persons; eight grandchildren; three great-grandchildren; one brother, Harvey Cash of Calgary; one sister, Pearl (Clem) Prochnau of Edmonton; as well as numerous sisters-in-law, brothers-in-law, nieces and nephews. Harold was predeceased by his wife, Leah; his parents, Henry and Elizabeth Cash; and his brother, Richard (Verlyn) Cash. Harold was raised in the Leader District and received his education at Hohenlinden School west of Leader. In 1952, he attended the University of Alberta in Edmonton and graduated with a B.A. In 1956, Harold began his teaching career at Medicine Hat High School for one year, then at Hillcrest College until 1964 when he began teaching at Montreal Street School for over 30 years until retirement. Life after teaching was farming which he truly enjoyed. Harold was an avid reader and loved to garden. He was a dedicated church member and enjoyed the time he spent with his grandchildren. Those wishing to pay their respects may do so at SAAMIS MEMORIAL FUNERAL CHAPEL, #1 Dunmore Road SE, on Sunday from 7:00 to 9:00 p.m. The Funeral Service will be held at SEVEN PERSONS COMMUNITY CHURCH, Seven Persons, on Monday, July 25th, 2016 at 2:00 p.m. with Pastor Maury McNeil and Reverend Murray Miller, co-officiating. A Private Interment will take place at Hillside Cemetery. Memorial gifts in Harold’s memory may be made to the Gideon’s International, Suite 177, 1415 – 28 Street SE, Medicine Hat, Alberta, T1A 8P9. Condolences may be sent through www.saamis.com or to condolences@saamis.com subject heading Harold Cash. Funeral arrangements are entrusted to