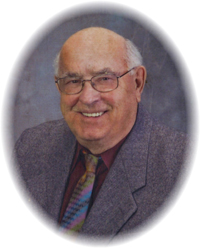 It is with deepest sadness we announce that William “Bill” Jacob Rumpel of Medicine Hat, beloved husband of the late Louise Rumpel, passed away on Thursday, July 21st, 2016 at the age of 88 years. Bill leaves to cherish his memory his daughter, Linda Louise (Dennis) Todd of Brooks; two grandchildren, Jennifer Louise Todd of Brooks and Janelle Linn Todd of Hilo, Hawaii; two sisters, Erna Wendling of St. Albert and Freda Metchuk of Calgary; as well as numerous nieces and nephews. Bill was predeceased by his wife, Louise on October 27th, 2002; his parents, Jacob and Theresa Rumpel; one daughter, Deborah Lynn Rumpel; four brothers and five sisters. Bill was born on December 7th, 1927 on the family farm near Earl Grey, Saskatchewan, the youngest child of Jacob and Theresa Rumpel. This made him as young as some of his nieces and nephews who fondly called him their favorite Uncle Willy. He received his formal education at Earl Grey and started his working career at the Grey Nuns Hospital as an x-ray technician. Bill retired from the Plains Health Centre as its purchasing agent. Bill and Louise were married on August 12th, 1949 in Regina where they continued to reside until retiring to Medicine Hat in 1996. He was a loving and dedicated father and grandfather. Special thanks to Dr. Saujani and the staff at the Medicine Hat Regional Hospital, 6West, for their dedicated care and compassion. The Funeral Service will be held at Saamis Memorial Funeral Chapel, #1 Dunmore Road SE, on Monday, July 25th, 2016 at 1:00 p.m. with Gary W. Goran officiating. A Graveside Interment will take place at Riverside Memorial Cemetery, Regina, Saskatchewan on Wednesday, July 27th, 2016 at 10:30 a.m. Memorial gifts in Bill’s memory may be made to the Medicine Hat & District Health Foundation, Palliative Care Unit, 666 – 5th Street SW, Medicine Hat, Alberta, T1A 4H6. Condolences may be sent through www.saamis.com or to condolences@saamis.com subject heading Bill Rumpel. Funeral arrangements are entrusted to