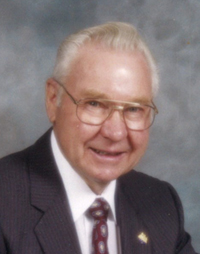 Harold Herman Seefried, beloved husband of Doris Seefried of Medicine Hat, passed away on Friday, July 22nd, 2016 at the age of 86 years. Harold leaves to cherish his memory his wife, Doris; his son, Larry; his daughter, Arlene (Ron Fodness); his granddaughter, Kristine Semrau (Greg) and children Kyra and Kayden; his brothers, Chris, Fred, Walter, and Ralph; his sister, Alvina; his sisters-in-law, Vera (Bob) Scott and Lil Anhelher; as well as numerous nieces and nephews. Harold was predeceased by his parents, Robert and Beata; his son, Ken; his brother, Jack; his sister, Helen Yanke; his sisters-in-law, Bonnie and Shirley; his brothers-in-law, Albert Yanke, Jim Stabler and Mike Anhelher. Harold was born on November 21st, 1921, in Medicine Hat and was raised in Manyberries on his family farm until the age of 16. He left the farm to work various jobs and obtain his mechanic papers. Harold married the love of his life, Doris Komosy, on October 14th, 1950. Together they raised their family. Harold worked for the CPR for 10 years and they moved to Doris’s family farm south of Nemiskam in 1961. They farmed until 1982 when they semi-retired to Medicine Hat. Harold sold real estate for several years and then retired. Harold and Doris travelled in their motorhome all over the states and BC. Harold belonged to the Elks and the Moose. He loved to fish, curl, golf and hunt. Those wishing to pay their respects may do so at VICTORY LUTHERAN CHURCH, 2793 Southview Drive SE, on Tuesday from 12:30 to 1:25 p.m. The Funeral Service will be held at VICTORY LUTHERAN CHURCH on Tuesday, July 26th, 2016 at 1:30 p.m. with Diaconal Minister Lila de Waal officiating. A Private Interment will take place at Hillside Cemetery. In lieu of flowers, memorial gifts in Harold’s memory may be made to the Carmel Hospice, St. Joseph’s Home, 156 – 3rd Street NE, Medicine Hat, Alberta, T1A 5M1. Condolences may be sent through www.saamis.com or to condolences@saamis.com subject heading Harold Seefried. Funeral arrangements are entrusted to