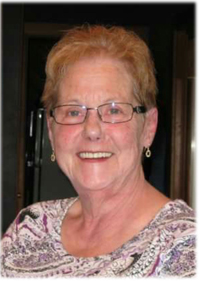 Patricia Ann Eld, beloved wife of Mervin Harvey Eld, passed away peacefully at her home in Medicine Hat on Friday, July 22, 2016 at the age of 71 years. She was born on November 12, 1944 in England to John and Margaret Thiessen and moved to Canada as a child. Patrica married, Mervin Harvey Eld on January 9, 1965. She will be forever remembered in the hearts of her husband, Mervin; children, Kevin (Laurette) their children, Courtney (Jaeden) and Kai; Sean (Chrissy) their children, Brittany, Greyson and Keegan; Colin (Tracey) their children, Hayden and Caelen; Kat (Rob) and their children, Nolah and Kamryn. Patricia will also be remembered by her sisters, Margaret Woolsey, Carol (Ian) Wylie and sister- in-law, Linda Thiessen. She was predeceassed by her brother, Gary Thiessen and brother-in-law, Al Woolsey. The family will honour Patricia’s life with a family interment in Drumheller, Alberta, on August 13, 2016. If friends so desire, memorial triubtes may be made directly to the Alberta Children’s Hospital, 2888 Shaganappi Trail N.W., Calgary, AB., T3B 6A8. (Condolences may be expressed by visiting our website at www.cooksouthland.com) Honoured to serve the family is