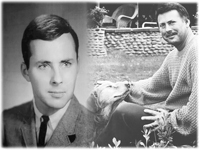 Richard Marshall passed away at home on July 20, 2016, after a brief battle with cancer. Richard was born in Medicine Hat, Alberta to his parents, Val and Mary Marshall and studied to be a doctor at the University of Portland, Oregon and Oceanography at Scripps College in San Diego. Richard met his wife, Lois in San Diego in 1966, and moved to Vancouver, British Columbia, where he started his company, Career Personnel. He loved his work as a recruiter and owner of his recruiting agencies for his entire career. In 1973, they moved to Gstaad, Switzerland with their son Justin, and then moved to Carmel, California in 1976, where they had two more children, Joelle and Jordan. After living in Carmel for 30 years, he moved back to Medicine Hat in 2006, to be closer to his family. Richard was a loving and devoted family man who was compassionate, thoughtful, generous and understanding who was always full of hope, strength and laughter. Richard will be remembered most for his legendary sense of humour and wit. He always saw the best in every person and every situation and his sense of humour never failed. He was a true gentleman who was respected and loved by all who knew him. Richard truly loved his family and friends and impacted the lives of all he knew. He had a long list of best friends, who truly were the best of friends. He had a passion for traveling the world and exploring new places, loved jokes and keeping in contact with people by e-mailing daily jokes. Richard was a great gardener who took great pride in his garden. He enjoyed great food, hiking, history, the challenge of fixing almost anything around the house and discussing any type of business. He primarily loved taking care of his family and guiding and watching his family grow. Richard always spoke encouraging words of wisdom and guidance that came from experience and always made time to listen to and help others. He had an enormous heart, generous soul and brilliant mind. Richard truly lived his life to the fullest and enjoyed every moment with humour, laughter and integrity. He was a truly remarkable and honourable man who will be greatly missed. Richard is survived by his son, Justin Marshall; daughter, Joelle (Ken) Silveira; son, Jordan Marshall and son, Johnny Ross; granddaughters, Caitlin Martis and Sophia Silveira; great- granddaughter, Landyn Martis; brothers, James (Lorine) Marshall and Robert (Darlene) Marshall and his mother, Mary Campbell. He was predeceased by his father, Val Marshall and the love of his life, Lois Marshall. A candlelight vigil will be held at St. Patirck’s Roman Catholic Church, 238 – 2 Avenue N.E., Medicine Hat, Alberta, on Tuesday, August 9, 2016, at 7:00 p.m.â€ˆ The Funeral Mass will be celebrated at St. Patrick’s Roman Catholic Church on Wednesday, August 10, 2016, at 10:00 a.m. Following the mass, a time of remembrance will be held at Echo Dale Regional Park, day use area/campground (on far east end) in Medicine Hat, from 3:00 p.m. – 9:00 pm. (Condolences may be expressed by visiting our website at www.cooksouthland.com) Honoured to serve the family is