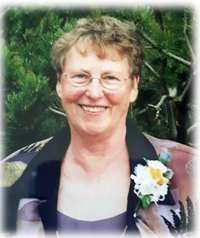 It is with sadness that the family of Laura “Ruth” Edwards announce her peaceful passing while at South Country Village in Medicine Hat on Wednesday, July 27, 2016, at the age of 80 years. Ruth was born in Foremost, Alberta on March 23, 1936, a daughter to proud parents, Willard and Edna Baxter. She raised her young family for many years until she met and fell in love with Charlie Edwards and together they raised her children and soon welcomed their grandchildren. Charlie predeceased her in 1999 and a piece of her heart went with him. Ruth was a mom before all else and the love for her family had no limit. She lovingly supported her grandchildren whether it was at a sporting, Special Olympics event or band gig. Many memories have been made sitting around the table eating the meal she had lovingly prepared. Family and community were her greatest loves. A woman of great strength, loyalty and devotion her legacy and memory will live on in the hearts of her children: daughters, Glennis Theofan (Rick Henderson) and Kim (Dean) Marchand and son, George (Alice) Theofan; grandchildren and great-grandchildren: Kevin (Serena) Wagner – Chas and Stella; Kyle (Robin) Marchand – Austin, Emilee, Austin and Chase; Brydon Marchand; Jordan (Sarah) Theofan – Nikolaus and Alivia and Daniel Theofan. In Ruth’s honour, a Private Graveside Service will be held at Hillside Cemetery with Life Celebrant Gerry Getz officiating. The family is eternally grateful for the extraordinary care and compassion shown to Ruth while at South Country Village and express their sincere, heartfelt appreciation to the RN’s and support staff. (Condolences may be expressed by visiting our website at www.cooksouth land.com) In lieu of gifts of sympathy to the families, we kindly request donations in Ruth’s name be made directly to the Special Olympics Medicine Hat, c/o the Medicine Hat Mall, P.O. Box 23046, Medicine Hat, Alberta, T1B 4C7. Honoured to serve the family is

Leave a Condolence for Suzanne , Michele, and Paul Faure