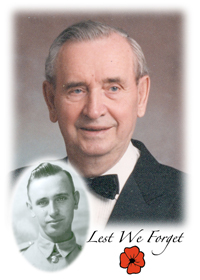 Mr. Andrew John Nelson, husband of the late Edna Nelson, passed away peacefully at the Masterpiece River Ridge in Medicine Hat on Tuesday, August 2, 2016, at the age of 91 years. Andrew was born in Hungary on November 15, 1924. He married Edna in Toronto in 1944 and resided in various communities throughout the western provinces. Andrew was a veteran who proudly served his country on 24 missions which included Burma and Germany. Andrew will be silently remembered by his family and friends. (Condolences may be expressed by visiting our website at www.cooksouthland.com) Honoured to serve the family is