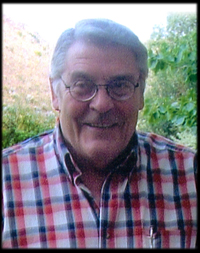 It is with deep sadness that the family of Gary William Henry Folkerts, beloved husband of Joyce Minnie Ellen Folkerts, announce his passing at Masterpiece River Ridge in Medicine Hat on Monday August 1, 2016, at the age of 80 years. Gary was born in Beinfait, SK., and raised in Willmar, SK. He attended Teachers College in Moose Jaw, SK., and later attended the University of Saskatchewan in Regina to obtain his degree, finding his love for teaching and later as a School Principal. Gary married the love of his life, Joyce Harrison on September 27, 1958, and together raised their three daughters. He was fun loving and liked a good time with his family and friends. Hunting, fishing, travelling and the Saskatchewan Roughriders were some of Gary’s passions in life. He was on the Alberta Highway Traffic Control Board, Secretary of the ATA Administrators Council as well as the First Chairman of the Alberta Association of Police Commissions. Gary was later appointed as Chairman of the Medicine Hat Police Commission. He will be lovingly remembered in the hearts of his wife, Joyce; daughters, Tammy (Nolan) Herman, Shelley (Rick) Belau and Taralyn Manary; grandchildren, Ashley (Ryan) Schwab, Jacey Belau, Lindsey (James) O’Donnell; great-grandchildren, Seth Schwab and two expected great-grandchildren on August 9 and September 28 of this year respectfully; and a sister-in-law, Eleanor Harrison. Gary was predeceased by his parents Gerhard and Tillie Folkerts; sister, Dolores (Delmar) Hoogeveen; brother-in-law, Elgin Harrison and in-laws, Tom and Gladys Harrison. A private family celebration will take place at Cook Southland Funeral Chapel with Pastor Shane Hein officiating. If friends so desire, memorial donations in Gary’s name may be made directly to the Heart and Stroke Foundation of Alberta, #124, 430 – 6 Avenue S.E., Medicine Hat, Alberta T1A 2S8 or to the Parkinsons Alberta Society, #101, 928 Allowance Avenue S.E., Medicine Hat, Alberta T1A 3G7. (Condolences may be expressed by visiting our website at www.cooksouthland.com) Honoured to serve the family is