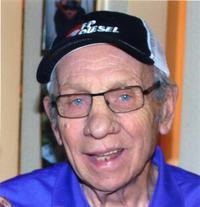 Passed away on August 3, 2016 after a brief but courageous battle with cancer with his wife Pat by his side. Wally leaves to mourn his wife Pat and their son Zachary Giesbrecht of Saskatoon. A previous wife Faye Giesbrecht and their children Darryl (Lenore) Giesbrecht and Diedre Giesbrecht all of Medicine Hat, AB. Six Grandchildren Tyler (Andrea) Stahl, Chelsey (Jaret) Lambert, Jamieson Haney, Curtis Windover, Sierra and Carter Giesbrecht. Four Great-grandchildren David and Tayler Giesbrecht, Zac and Livia Stahl. One brother John Giesbrecht of North Battleford, one sister Gertrude (Trudy) Giesbrecht of Saskatoon. Mother-in-law Jean Morrison; brothers-in-law Cam (Sharon) Morrison, Vince Morrison; sisters-in-law Cathy (Mike) Wilson, Carm (Kevin) O’Grady, Shelly (Rob) Perna, Moira Morrison; numerous Nieces, Nephews, cousins and friends. Wally was predeceased by his parents Elizabeth and Cornelius Giesbrecht, and brother Henry Giesbrecht. Wally was an avid ball player and curler in his younger years. He enjoyed watching all sports on TV. The last few years his special time was his league bowling with Zach. Wally founded Western Diesel Wholesale in 1978 in Medicine Hat. In the years since, he expanded his operations and built it into the successful company it is today. He was a hands on guy and remained that way right up until he took sick. He enjoyed trading stories with the many customers, suppliers and acquaintances he met over the years in business. Wally also enjoyed gardening and spending time at the lake with his children and grandchildren, but most of all Wally like to see people laugh and kept his sense of humour right to the end. He will be greatly missed. Public viewing and meet with the family will take place Monday, August 8, 2016 at Park Funeral Chapel from 7:00 p.m. to 9:00 p.m. Funeral Service will take place on Tuesday, August 9, 2016 at 1:30 p.m. at Park Funeral Chapel, 311 3rd Avenue North. Interment will follow at Hillcrest Memorial Gardens in the Garden of The Good Shepherd. To share memories and condolences, visit www.parkfuneral.ca “Obituaries” Arrangements entrusted to James Werezak, Park Funeral Chapel, 306.244.2103.