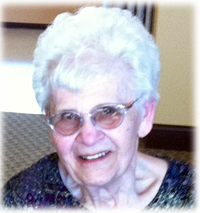 January 17, 1931 ~ August 8, 2016
Mrs. Beatrice Marguerite Armstrong of Medicine Hat, beloved wife of the late Mr. Thomas Armstrong, passed away peacefully at the Medicine Hat Regional Hospital on Monday, August 8, 2016, at the age of 85 years. Beatrice leaves to cherish her memory: children, Joanne (Don) Mitchell of La Broquerie, MB., Bob (Dalyce) Armstrong of Medicine Hat, Roger (Pauline) Armstrong of Leduc, AB., Donald (Judy) Armstrong of Estevan, SK. and Richard (Jackie) Cannon of Edmonton, AB.; grandchildren, Mandi (Devin) Urlacher, Josh Armstrong, Tamara (Robbie) Armstrong, Scott (Maria) Mitchell, Mark Mitchell, Chris (Elisha) Mitchell, Bradley (Tracy) Fox, Cheryl (Craig) Langdon and Richie (Veronica) Cannon; 9 great-grandchildren and 3 great-great-grandchildren; sisters, Annette (Richard) Cheverette and Yolande (Bob) Comstock; brothers, Paul (Faith) Séguin and Georges (Jéanne) Séguin as well as numerous nieces, nephews and special friend, Fran Frey. Along with her husband, Beatrice was predeceased by her sisters, Claudette Beuchard and Rejeanne Belanger. Beatrice was born on January 17, 1931, in Kirkland Lake, Ontario. She was raised in the small community of Swastika, ON. and received her schooling in Kirkland Lake. Beatrice worked in her Dad’s grocery store until her marriage to Thomas on July 11, 1953. In 1968, they moved out west, settling in Burstall, SK. After Thomas’ retirement in 1983, they moved to Medicine Hat where they managed apartment buildings for a number of years. Beatrice moved into the Teeoda Lodge in 2005, and then into the Cypress View Lodge in 2012, where she resided until her passing. Beatrice was a very community minded individual as shown through her years of involvement with the Ladies Auxillary of the Royal Canadian Legion. She enjoyed playing darts (often leaving tiny holes in the ceiling above the board) and was also on the welcoming committee at the Teeoda Lodge for a few years. Beatrice also enjoyed watching curling and numerous other sports on TV, especially her Flames! She was a very social person and enjoyed playing crib, camping, knitting and pretty much any other activity where she had someone to visit with. She will be dearly missed by all those who knew her. Family wish to extend their sincere appreciation to the staff and nursing care professionals at the Cypress View Lodge and the 4 West at the Medicine Hat Hospital for the exceptional care that Beatrice received. A Celebration of Beatrice’s life will be held at Cook Southland Funeral Chapel, 901 – 13 Street S.W., Medicine Hat on Thursday, August 11, 2016, at 11:00 a.m. with Father Francis Tran officiating. Private Interment will follow at Hillside Cemetery with a time of fellowship thereafter in the Cook Southland Reception Facility. (Condolences may be forwarded by visiting our website at www.cooksouthland.com). If friends so desire, memorial tributes in Beatrice’s name may be made to the Multiple Sclerosis Society, 101, 1201 Kingsway Avenue S.E., Medicine Hat, Alberta, T1A 2Y2. Honoured to serve the family is Cook Southland Funeral Chapel, 901 – 13th Street S.W. Medicine Hat, Alberta T1A 4V4 Phone 403-527-6455