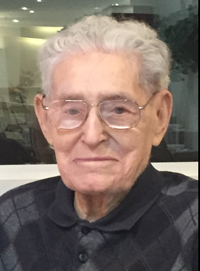 Mr. Otto Woelfle of Medicine Hat, beloved husband of the late Edith Woelfle, passed away on Tuesday, August 9th, 2016 at the age of 101 years. Otto leaves to cherish his memory one son, Marvin (Edith) Woelfle of Medicine Hat; one daughter, Marylin (Gordon) Teel of Calgary; six grandchildren, Janice Korenic of Kelowna, Judy (Glen) Getz of Medicine Hat and their children, David (Vicky) and Jade, Jackie Doell of Medicine Hat and her children, Keeley and Grayce, Joy (Matt) Huffadine of Medicine Hat and their children, Emily, Hailey and Jason, Sandy (Danny) Polomark of Victoria and their children, Stephanie and Nicholas, and Cheryl (Shawn) Prawdzik of Calgary and their daughter, Sydney; one sister, Anita (Christian) Traxel; one sister-in-law, Tilley Martin; as well as numerous nieces and nephews. Otto was predeceased by his wife, Edith; his parents, Jakob and Bertha Woelfle; two brothers, Jakob (Elizabeth) Woelfle and Hugo (Annie) Woelfle; and five sisters, Martha (Henry) Fischer, Hertha (Andrew) Schafer, Metha (William) Walker, Irena (Walter) Poffenroth and Alvina (Reginald) Zebedee. Otto was born on February 25th, 1915 at Irvine, Alberta and was raised and educated in the Hilda area. It was in Schuler where Otto met the love of his life and future wife, Edith and they were married in Medicine Hat on October 20th, 1938. Together they farmed in the Hilda area for eighteen years, and while farming, they also had a school bus route, which they worked together. In 1956, they moved to Medicine Hat and continued to farm from the City. In 1958, Otto formed Necker & Woelfle Construction with his partner, Arnold Necker. He built many commercial and residential homes in Medicine Hat and surrounding areas, including the Chinook Building in downtown Medicine Hat, and several Royal Bank buildings in Brooks and other towns. In 1975, they sold both the farm and construction business, and retired. Otto enjoyed travelling with Edith, gardening and woodworking. He was also an avid supporter of the Medicine Hat Tigers, Medicine Hat Blue Jays and Mavericks baseball teams. Otto and Edith were longtime members of the Hillcrest Evangelical Church. The Funeral Service will be held at SAAMIS MEMORIAL FUNERAL CHAPEL, 1 Dunmore Road SE, on Saturday, August 13th, 2016 at 1:00 p.m. with Pastor Lance Duncalfe officiating. A private family interment will take place at Hillside Cemetery. In lieu of flowers, those wishing to remember Mr. Otto Woelfle as an expression of sympathy may do so with a gift to the Palliative Care Unit, c/o Medicine Hat and District Health Foundation, 666 – 5th Street SE, Medicine Hat, Alberta, T1A 4H6. Condolences may be sent through www.saamis.com or to condolences@saamis.com subject heading Otto Woelfle. Funeral arrangements are entrusted to